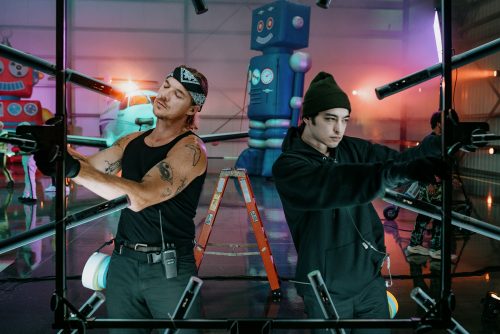 Joji teams up with Diplo on a new collaboration called “Daylight,” the latest single from his highly anticipated new album Nectar, due out on September 25 through 88rising, distributed by 12Tone Music.

The two daydreamers bumble around the set and ultimately derail the shoot of the young (at heart) pop divas.

“Daylight” is the fourth pre-release track from Nectar. It follows Gold-certified single “Sanctuary” and his first 2020 single “Run,” which earned Joji his highest-ever entry on the Billboard Hot 100 and his television debut on the Tonight Show with Jimmy Fallon; and second single “Gimme Love” which Complex hailed as “a stickypop anthem with haunting vocals.” Last month, Joji also released a tingly and transformative remix of “Gimme Love” by Channel Tres.
On the song, Joji says, “It might be nice for people to hear a song about daylight, especially when we don’t get as much of it as we used to,” and on the collaboration, Diplo says “Joji is one of my favorite artists. I’m lucky he answered my text!”