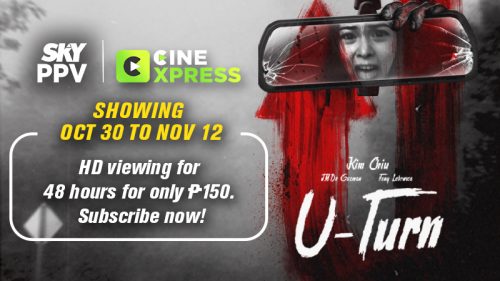 Watching a scary movie this Halloween may not be possible in cinemas this year, but there is a new way to relive the experience by watching Star Cinema’s newest horror film starring Kim Chiu, “U-Turn” powered by CineXpress on SKY Pay-Per-View from October 30 to November 12.

CineXpress is the latest digital initiative of ABS-CBN Films that offers Filipinos here and abroad the chance to catch original, first-run, and new Filipino movies in the safety of their homes.

“U-Turn,” the maiden offering of CineXpress, features Kim Chiu as a journalist who wants to be taken seriously in her career. Her life takes a turn as her stories become viral. She gets a taste of her own medicine when her twin brother dies in an alleged suicide and becomes the topic of sensationalized reports. She is then forced to investigate the incident, taking her boyfriend Robin (Tony Labrusca) and police officer Kevin (JM de Guzman) as they uncover more deaths. Will they solve the mystery and stop the body count from piling up?

SKY subscribers can watch “U-Turn” commercial-free and in high definition for 48 hours upon purchase via its pay-per-view service for only P150.

In addition, SKY also brings romance and international flavor to its lineup of movies. Subscribers can avail of the unli-viewing experience of the 2020 romantic film, “Hindi Tayo Pwede,” starring Lovi Poe, Marco Gumabao, and Tony Labrusca, airing until November 14 for only P99, along with bonus movies such as “Mr. & Mrs. Cruz” and “Camp Sawi.”

They can also catch the Japanese horror flick “Howling Village” and Korean action-thriller “Steel Rain 2” this month for only P99, unli-viewing.