It’s no secret that fans of Korean pop artists or K-Pop in the Philippines have the most widespread following online. There’s never a day when a particular K-Pop boy or girl group isn’t a trending topic on Twitter, or the subject of the latest viral dance craze on TikTok or Facebook.

But in this great time of need, some of these K-Pop fan groups have chosen to not just sit idly at home and waste time following their idols online, who are also on quarantine due to the COVID-19 pandemic. One such group is ISKO!EXO, a small online collective of alumni and students from University of the Philippines-Diliman who are fans of the massive boy band EXO. 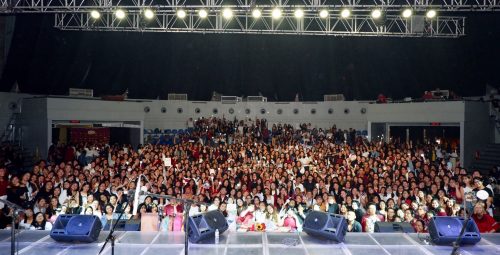 The ISKO!EXO group consists of University of the Philippines-Diliman alumni and students who are big fans of the boy band EXO

Seeing the need for more Personal Protective Equipment (PPE) for medical frontliners and other health workers, the group immediately jumped at the opportunity to use their massive online influence for the greater good.

“To be honest, it was heartbreaking to read of the many pleas that were made on behalf of the hospitals not just in Manila, but also in Visayas and Mindanao, and seeing photos of the makeshift PPE gear that our healthcare workers are using,” one of the Iskeri organizers said. Iskeri is the name for the group’s readers which originated from isko (isko exo) + eri (EXO fandom name).

With many of them mostly online at this time, a decision was made to launch a donation drive through PayMaya, which they have been used to using before to pay for concert tickets, fan-made merchandise, and other K-Pop related items online.

The ISKO!EXO team officially announced their donation drive on Twitter last March 24, 2020 with UP Medical Foundation as their main beneficiary. With their goal to support mass testing for the country, they have chosen UP Medical Foundation as their beneficiary since it was among the first ones to initiate a fund raising for the mass production of its own testing kits. 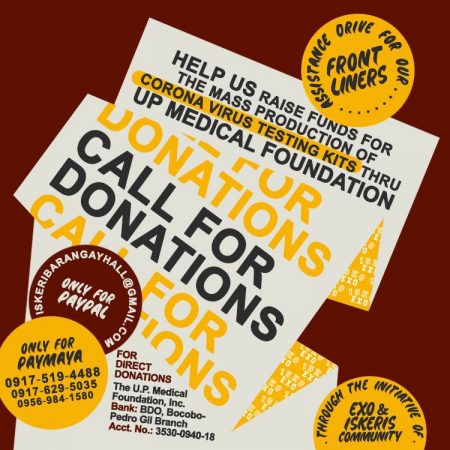 “We strongly believe that mass testing is one of the best ways to help flatten the curve and support the current enhanced community quarantine measures being implemented in the country,” the Iskeri organizer added.

Aside from the UP Medical Foundation, they have fostered partnerships with private individuals to create PPEs for frontliners from various institutions. This also allowed them to provide livelihood for workers who are helping them produce PPEs.

In just a few short days, they were able to raise more than P100,000 from donations all over the country, which they used to donate P40,000 to UP Medical Foundation for testing kit production and P100,000 for PPE distribution to hospitals.

“The response has been, honestly, overwhelming. It constantly reminded us that any collective effort, no matter how seemingly ‘small’ one’s contribution is, can make a huge difference,” the Iskeri organizer shared.

Standing as one against COVID-19

These young, compassionate Filipinos are just some of the individuals and groups who have been standing together in order to help protect medical frontliners, provide basic necessities to urban poor residents, and generally help alleviate the effects of the COVID-19 pandemic to citizens of various communities.

To aid in this objective, PayMaya has launched its #OneAgainstCOVID19 campaign allowing Filipinos here and abroad to donate to various organizations such as the Philippine Red Cross, UNICEF, Oxfam Pilipinas, Caritas Manila, and the UP Medical Foundation, as well as more than 30 other groups, using any debit, credit, or prepaid card (via donate.paymaya.com) or through the Pay Bills section of the PayMaya app.

To date, PayMaya has helped raise more than P18 million in funds on behalf of its partner organizations who are continuing their initiatives in providing urgent relief and response efforts for their respective beneficiaries.