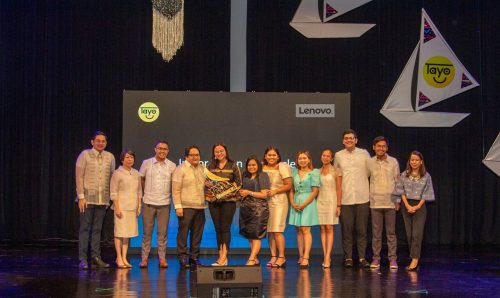 The recently concluded 17th TAYO (Ten Accomplished Youth Organizations) Awards ceremony saw the Junior Bedan Law Circle being awarded a technology grant from global technology and innovation leader Lenovo for its project dubbed Lingkod Laya. The said initiative aims to restore the dignity and liberty of Manila City Jail’s prisoners by helping them maintain good health while in detention and assisting in the processing of their release.

“As a global leader in innovation, our mission at Lenovo is to provide everyone with smarter technology that can solve problems and create opportunities. We are proud to recognize the contributions of the Junior Bedan Law Circle and to play a critical role in enhancing the crucial points of our correctional systems. As a people-centric organization, Lenovo hopes to give back to society by aiding and empowering former detainees in their attempt to attain a second chance in life,” said Michael Ngan, President and General Manager, Lenovo Philippines.

To recognize the efforts of the Junior Bedan Law Circle, Lenovo — the official technology partner of the annual TAYO Awards since 2011 — bestowed to them a technology grant in the form of a brand-new Lenovo S145 laptop. The company believes that with this, the organization can more efficiently and effectively help digitize the Manila City Jail’s database of records.

With Lenovo’s grant, the Junior Bedan Law Circle can now properly store the records of every inmate, which will help them address health-related matters and speed up the inmates’ release process.

The grant has also facilitated the Junior Bedan Law Circle’s plans to expand the project to the New Bilibid Prison in Muntinlupa City and in their next venture of developing an employment system for former convicts. The Junior Bedan Law Circle also seeks to use the grant in their upcoming Project Ligaya, a well-being program that seeks to support children in conflict with the law at the Manila Youth Rehabilitation Center.

The Junior Bedan Law Circle is the student organization of the Legal Management Department of the San Beda University College of Arts and Sciences. Its Lingkod Laya project unclogs the court dockets involved in processing the release of Manila City Jail inmates as the current proceedings have become detrimental due to congestion.

“Our organization believes that inmates are still humans despite having committed crimes, and just like everybody else, they deserve love, care, and compassion, and are entitled to rights. We also believe that they deserve a chance to redeem themselves because, at the end of the day, they still have the right to live. This is why we are committed to helping inmates attain liberty and live a healthier life despite being behind bars,” said Christine Yvonne Balinas, Community Involvement Chairperson of the Junior Bedan Law Circle.

To date, the Manila City Jail houses over 6,400 inmates despite its ideal capacity of only 1,100 people and it only has two paralegals processing their release. In addition, the jail lacks a centralized database of records, thus requiring the need to process all releases manually.