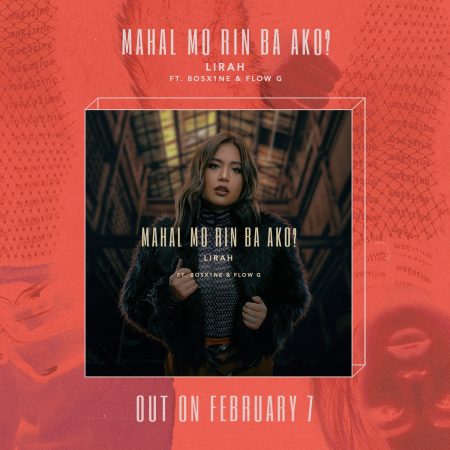 The newest OPM hip-hop muse LIRAH is set to release a surprise track with hip-hop power players Ex-Battalion for a collaboration to end all collaboration. “Mahal Mo Rin Ba Ako?”, to be released on February 7, 2020, features Bosx1ne and Flow G. The track is LIRAH’s follow up to the hit “Sahod” and is released under Ivory Music & Video.

“Mahal Mo Rin Ba Ako?” shows a different side of the hip-hop prodigy. Showcasing LIRAH’s sweet yet powerful vocals, the track details the feelings of falling miserably in love with a person, leaving us with the question “Do you love me as much as I love you?” Bosx1ne and Flow G’s verses are as powerful and impassioned, showcasing the rappers’ lyricism and poetry that made them a staple in today’s charts. “Mahal Mo Rin Ba Ako?” is an emotional concoction of lyrics that touch hearts and a melody that speaks to the soul.

LIRAH has been hustling in the music industry since she was 13 years old, joining and finishing strong in GMA 7’s reality singing competition Protégé: The Battle for the Big Break. Her stellar performance in the said competition impressed judge Gloc-9 so much that he took LIRAH under his wing soon after. Her debut single “Sahod” (released August 23, 2019) was received widely by OPM fans and had earned her a Best New Artist nomination from Wave 89.1’s Year End Awards 2019.

Ex Battalion is a hip-hop collective known for pushing the boundaries of OPM hip-hop. Their hit single “Hayaan Mo Sila” is one of the most streamed songs of 2017. Its music video currently has 80 million hits on YouTube. The group has since been dominating the airplay, social media, streaming and downloading sites.