2020 marks the much-awaited return of love team Liza Soberano and Enrique Gil to television as they bring back romance to primetime in their journey to finding love as a choice in a world full of options in “Make It With You,” which will air this January 13 (Monday) on ABS-CBN Primetime Bida.

Liza will bring life to Billy, a girl who takes on odd jobs just to make ends meet for her family. Being incredibly resourceful, Billy hustles as a matchmaker matchmaking in Croatia on the side just so she can regularly go on dates and get free meals and gifts she can sell for more income.

Meanwhile, Enrique will play Gabo, a lost soul who finds himself wandering in Croatia hoping to finally determine his path in life. Determined not to return to the Philippines, he does not let hardships deter his spirit and faces all struggles head on living in a foreign country.
The two live different, separate lives—until one day, Croatian socialite Antonia approaches Billy to match her with Gabo in exchange for money. To make sure Gabo is worthy of meeting Antonia’s father, Billy will teach the young man the culture and traditions of Croatia. But, as they spend moments together, they will find themselves falling for each other.

At the time that falling in love is not an option, will Billy and Gabo fight their feelings for each other or will they follow what their hearts are telling them? 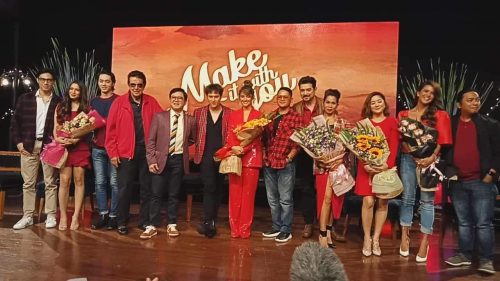 Also part of “Make It With You” are Ian Veneracion, Katya Santos, Fumiya Sankai, Eddie Gutierrez, Pokwang, Vangie Labalan, and Herbert Bautista, with up-and-coming stars Jeremiah Lisbo, Anthony Jennings, and Daniela Stranner. It is under the direction of Cathy Garcia-Molina and Richard Arellano and was written by Mark Angos.

Watch out for “Make It With You,” weeknight after “FPJ’s Ang Probinsyano” on ABS-CBN and ABS-CBN HD (SkyCable ch 167).

Advancing smoking cessation in the Philippines