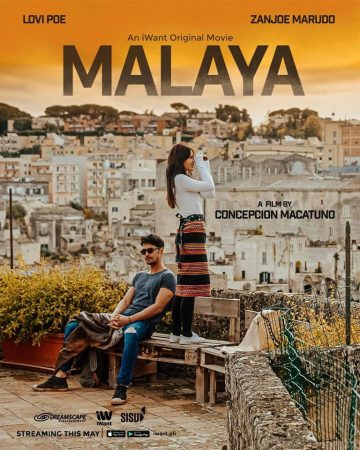 Lovi Poe and Zanjoe Marudo grapple with the choice to abandon or realize a once-in-a-lifetime love in the movie “Malaya,” another dreamy romance from “Glorious” director Concepcion Macatuno, now streaming on iWant and TFC.tv.

The iWant original movie features the first on-screen pairing of the actors and was shot entirely in the scenic Italy, which is home to hundreds of thousands of overseas Filipinos. “Malaya” follows two wandering souls who chase their dreams in a foreign country, putting the relatable real-life experiences of overseas Filipinos at the forefront.

New to the country and still adjusting to its customs, sweet Malaya (Lovi) is determined to make a life of her own and help her mother who has been working there for years. Through her first job, she meets the hardworking enigma Iago (Zanjoe), and the two form an unexpected yet undeniable connection. However, because of their mismatched priorities and ambitions, they choose to walk away from each other .

Years later, they meet again. Malaya finally thinks it is their time to be together, until Iago announces that he is engaged to be married.

Will they be able to completely let each other go? How long should one wait for the right time and the right person?

Produced by Dreamscape Entertainment and Sisu, “Malaya” premiered in the Philippines on iWant and overseas on TFC.tv simultaneously last Thursday (May 28), 12MN Manila time.

Stream “Malaya” on TFC.tv and the iWant app (iOs and Android) or iwant.ph.