Unleash the Mang Kepweng in you this holiday season! 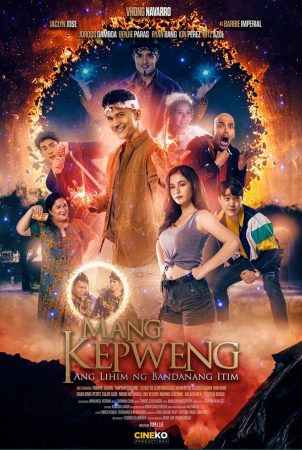 The most awesome comeback of the year happens this Christmas Day, December 25 in ‘Mang Kepweng: Ang Lihim ng Bandanang Itim,’ an official entry to the Metro Manila Film Festival (MMFF) 2020.

From the success of its prequel ‘Mang Kepweng Returns’ in 2017, Vhong Navarro as Mang Kepweng takes on new journey and challenges as villain Maximus Tolonges (played by Joross Gamboa) uses the power of the black bandana he stole from the kingdom of Engkadia to sow terror all over the place.

While only Mang Kepweng and his red polka dot bandana, the counterpart of the black bandana, can stop Maximus, the magic of red polka dot bandana slowly diminishes due to his worsening attitude—he becomes boastful as he gets people’s attention because of his healing power. With the help of his new friends, Mang Kepweng finds the three ingredients that will bring back the power of his bandana but the journey becomes harder as they encounter the elements that try to stop them.

Will it be too late to realize that having such great power should come with great responsibility and humility? Will Mang Kepweng still be able to save the kingdom of Engkadia and the people from Maximus?

It should be noted that ‘Mang Kepweng’ is a character that was popularized by the late comedian Chiquito in 1970’s to early 80’s. In previous interviews, Vhong expressed how proud he is to reprise the classic role.

It’s time to unleash the ‘Mang Kepweng’ in everyone of us this holiday season as ‘Mang Kepweng: Ang Lihim ng Bandanang Itim’ streams on http://upstream.ph beginning on December 25, Christmas Day. Using your GMovies account, tickets can be purchased as early as now on the site for only Php 250.00 each.