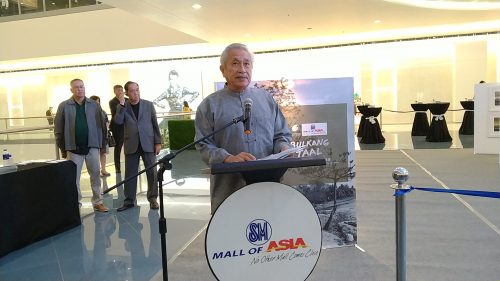 Baldemor, who hails from Paete in Laguna, was outside the Paete city hall when Taal Volcano erupted and witnessed the sky transform into a towering grey and purple mass. Fourteen days after the eruption, Baldemor travelled to Tagaytay and followed the road going to Talisay. Quietly observing the scenery and the people affected by the volcano’s wrath, he saw how the towns surrounding the Taal Lake had transformed overnight – the complete devastation, displaced evacuees, and animals that were left behind.

A poem by Bangon Batangas, a group he saw through Facebook, became the starting point for his works. In contrast to his distinct style and use of vibrant and happy colours, Baldemor captures Taal in its turbulent and solemn state, and Taal’s once lush, green vistas are portrayed as desolate and barren landscapes – an aide-memoire that nature is both beautiful yet can be turbulent and angry.

Manuel Baldemor is a painter, sculptor, printmaker, writer and book illustrator from the artistic town of Paete, Laguna province renowned for its woodcarvers.
Known for beautifully capturing the warmth of Christmas in the Philippines, Baldemor has contributed more than 24 designs for reproduction on UNICEʼs greeting cards for worldwide distribution. For 18 straight years, UNICEF has continuously chosen Baldemorʼs work, a remarkable feat considering the many submissions from all over the world competing for the honor.

In his “Philippine People Power”, he imbues life and action into his art and lets viewers become one with the character in his 2009 epic Mosaic mural installed on a 3 x 5 meter wall inside Basilica of St Therese of the Child Jesus in Lisieux, France.