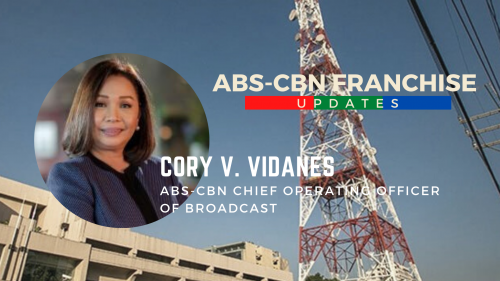 OPM president Ogie Alcasid said the group enjoined ABS-CBN in its plea for a renewed franchise as the network has been instrumental for many local artists to achieve their potential and help alleviate their families’ lives through its various programs and platforms.

Professional Artist Managers, Inc. (PAMI) president June Rufino also sought the Congress’ consideration of the livelihood of its members and their families.

“It is our humble plea to the honorable franchise committee to find it in your hearts and consciousness the future of over 5,000 families who are dependent and hopeful for your affirmative decision on the franchise renewal of ABS-CBN,” Rufino urged.

“Without the production employment from ABS-CBN, a significant number of taxpaying Filipino artists will be burdened by their subsequent loss of income,” she added.

Meanwhile, ABS-CBN COO for broadcast Cory Vidanes shared how the network’s workers continue to support the company’s fight to renewal amid the fears of losing their jobs.

In the same hearing, Sentro proposed to include pro-worker provisions in the network’s franchise renewal and expressed that the threat of retrenchment among the affected workers is inhumane.

“It’s not about what we debate today that matters, it’s the impact of our debate to our people. And if we want to be relevant and responsible in the delivery to our constituents and our people, it’s high time that we decide to renew for another 25 years the franchise of ABS-CBN. We will not only be helping their people, but the entire country,” he voiced out.

Paranaque City District II Rep. Myra Tambunting likewise urged fellow legislators to vote in consideration of the affected ABS-CBN workers, especially now that the country is in the midst of an unprecedented unemployment crisis.

She said, “I hope that when the committee decides on the franchise, we will consider the many employees whose livelihood are dependent on our decision.”