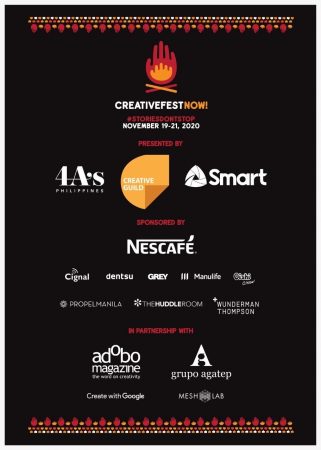 CreativeFest, the country’s largest gathering of creative professionals and advertising practitioners, is set to go all-digital with a name that reflects the tectonic shift brought about by our current reality: CreativeFest NOW!

Happening from November 19 to 21, the event—which is completely free to advertising and communication professionals, students, and the public—is a three-day festival with the theme: Stories Don’t Stop. CreativeFest NOW! is organized by the Association of Accredited Advertising Agencies of the Philippines (4As) and the Creative Guild of the Philippines (Creative Guild), an organization composed of the creative directors of 4As member-agencies.

“With the current situation putting much of the world in a standstill, we are recognizing, all the more, the power of creativity to move people. There are boundless stories to be told – of creativity persisting, amidst loss and triumph, stories being written and constantly rewritten, every single day,” says 4As Chairman and BBDO Guerrero Creative Chairman, David Guerrero.

The event will be headlined by some of the most important figures who are changing how we approach creativity. The keynote speakers of the event are: Merlee Jayme, one of the most celebrated women in advertising and the president of the newly formed global agency, dentsumcgarrybowen, she is also the first Filipino to hold the position; Audrey Tang, a former hacker and now Taiwan’s youngest cabinet member as Minister of Digital; and, Morten Bonde, esteemed author, motivational speaker and LEGO art director.

They are joined by other creative heavyweights, like Dumb Ways To Die creator John Mescall; the makers of culture-shaping and award-winning works from Libresse and AMV BBDO, Nadja Lossgott and Nicholas Hulley; one of Esquire’s Most Influential People of the 21st Century, John Maeda; internet sensation Macoy Dubs; the Filipino-American storyboard artist and director, Jay Oliva; the man behind the Secret Base, Calvin Cuevas; and, many more.

“We believe that creativity doesn’t pause in the middle of a pandemic,” says Creative Guild President and VMLY&R Chief Creative Officer, Rey Tiempo. “Apart from keeping the creative flame alight, it will also serve as a much-needed helping hand during these challenging times – as proceeds from the event will be donated to Aidvertising, to help industry workers and families affected by the lockdowns.”

Aside from the first iteration of the event to go online, CreativeFest NOW! also promises to be the most accessible, as everyone is welcome to join the three-day discussion. The event will also benefit Aidvertsing, a fundraising effort that aims to assist freelance advertising production workers who lost their jobs because of the pandemic.

CreativeFest NOW! is presented by the 4As, the Creative Guild, and Smart. The event is sponsored by Nescafe, Cignal, ManuLife, Oishi, Dentsu JaymeSyfu, Grey Manila, Propel Manila, The Huddle Room, and Wunderman Thompson. In partnership with Grupo Agatep, Adobo Magazine, Mesh Lab, and Google.