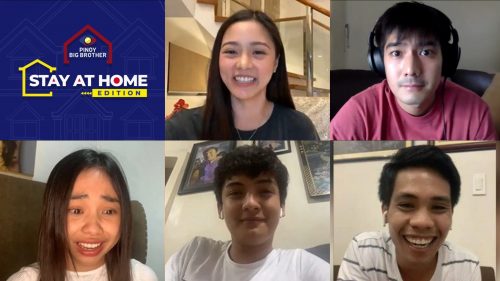 Netizen can now experience being Kuya’s housemates while they are in the comforts of their homes with the launch of “Pinoy Big Brother: Stay At Home Edition,” which aims to highlight everyone’s role in slowing down the COVID-19 outbreak by staying at home.

Last Monday (March 30), Kuya gave his first Ligtask: create a creative video while saying the pledge “Ako’y isang stay at homemate, at mananatili ako sa loob ng aking bahay!” The chosen “stay at homemate of the day” was Joshua Caingcoy who accomplished the task by showing his skills as a puppeteer.

It was then followed by the second Ligtask where Kuya asked his homemates to send a message of support to frontliners. Netizen Gilmar Catalonia Resureccion impressed Big Brother with his cheerdance moves as he did a chant praising the frontliners’ sacrifice amid the ongoing outbreak.

Apart from Ligtask, Big Brother has other surprises for his homemates, including “Online Confession Room” that will give the netizens the chance to be heard as they answer questions from Kuya, and “Online Tambayan” that will feature several former housemates and “PBB” hosts and have chance to bond with fans through a live chat.

Meanwhile, “Pinoy Big Brother: Stay At Home Edition” also became an avenue for Kuya to catch up with ex housemates Kim Chiu, Seth Fedelin, Robi Domingo, Yamyam Gucong, and Maymay Entrata as he surprised them with a video call while they are at their homes and shared big four tips to fight COVID-19.

Kim was instantly overjoyed upon hearing Kuya’s voice and was ecstatic to have him as her guest. Robi, on the other hand, reminisced about his time as a housemate and was grateful for the lessons he learned inside the “PBB” house. In their chat, Big Brother shared tips on how they can stay healthy during the quarantine period.

Maymay was overwhelmed and got emotional after realizing she was talking to Big Brother and expressed how she missed him. Yamyam was also in shock and had the chance to share how much has changed in his life after becoming a big winner.

Kuya requested a house tour from Seth, who showed the parts of his home that were renovated with all the opportunities that he received after joining “PBB.” Like the others, Big Brother gave him reminders on what to prepare during a pandemic.