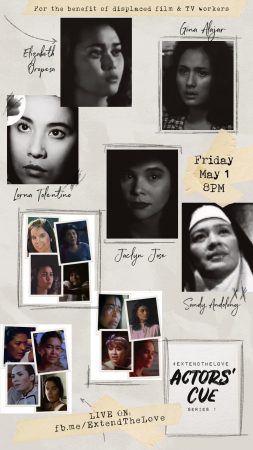 After launching its first episode last May 1 with acclaimed actresses Gina Alajar, Sandy Andolong, Jaclyn Jose, Elizabeth Oropesa and Lorna Tolentino, #ExtendTheLove Actors’ Cue Series continue its roundtable with two live sessions this Sunday (May 3) and Monday (May 4) evening at 8PM on fb.me/ExtendTheLove.

The sessions delves into a discussion of the films made by the actors and also interact with the live online viewers by answering their questions. The panel is moderated by filmmaker Adolfo Alix, Jr. The proceeds for the donations for both events will benefit of displaced film and TV workers affected by the quarantine in the Philippines. 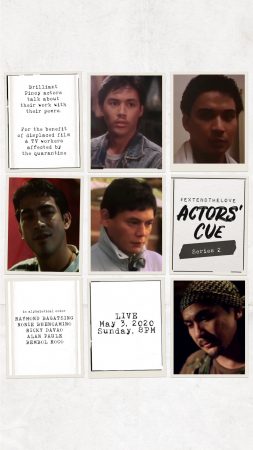 #ExtendTheLove Initiative was founded to help affected film workers during the enhanced community quarantine by offering free streaming of films like “4 Days,” “Kinabukasan” online and asking viewers for donation.

They can donate through:

For the list of our beneficiaries and to track the donations coming in:
https://tiny.cc/apb5lz