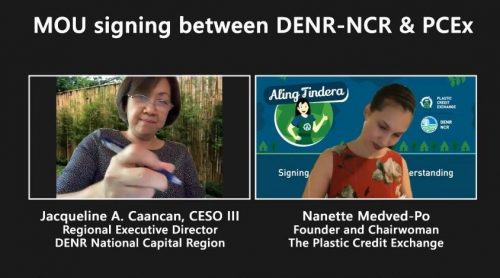 In response to the government’s call-to-action on rehabilitating Manila Bay, Plastic Credit Exchange (PCEx) and The Department of Environment and Natural Resources (DENR), with the support of the PepsiCo Foundation, partnered to roll out a long-term ‘AlingTindera’ coastal cleanup program. PCEx Chairperson Nanette Medved-Po and DENR Regional Executive Director Jacqueline A. Caancan announced the strategic partnership at the DENR headquarters in Quezon City.

Through this initiative, PCEx incentivizes fisherfolk and their families to ‘catch’ plastic waste in and around Manila Bay and sell these in exchange for cash at AlingTindera collection points stationed along coastal areas. The AlingTinderas (women sari-sari store owners) aggregate the plastic, and then turn a profit by selling these to sustainability-conscious companies through PCEx.

“The conservation of Manila Bay should not come to a halt while we address the global pandemic. We need to collaborate to create long term solutions for the health of our oceans and waterways because it is very much tied to our own health,” said Medved-Po.

DENR data has shown that five days of coastal cleanup on the Manila Bay island could yield 16,000 kg of trash, the bulk of it plastic sachets. With increasing concern about safety and cross-contamination due to COVID-19, there has been a heightened demand for single-use plastics, which means that hard-won environmental measures to rehabilitate Manila Bay have once more been undone.

“This partnership comes at an opportune time as the Manila Bay Task Force, led by no less than our DENR Secretary Roy A. Cimatu, is in the thick of its commitment to clean up and rehabilitate the Manila Bay, including all tributaries that drain to the bay,” said Caancan. “The AlingTindera project represents an alternative solution of collecting used plastic packaging. At the same time, it also provides economic incentives to the sari-sari store owners and to their suki.”

“We invite businesses who would like to responsibly offset their plastic footprint to join our growing movement,” Medved-Po said. “It’s only through collective action that we can continuously reduce the flow of plastic into our environment.”

PepsiCo Corporate Affairs Head for the Philippines and Asia, Anne Marie Corominas emphasized: “PepsiCo realizes no single organization or industry can solve the plastic waste challenge on their own. That is why we’re working with PCEx and communities in Manila through the AlingTindera program to accelerate systemic change and meaningful progress through collaborative, holistic and sustainable solutions in the Philippines.”