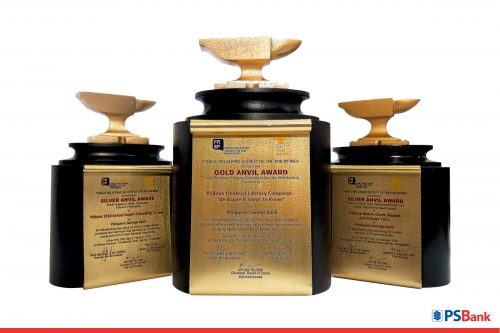 Philippine Savings Bank (PSBank) won big once again as it secured three prestigious recognitions at the recently-concluded 55th Anvil Awards, held at the iconic Manila Hotel. Dubbed as the “Oscars” of the PR industry, the Anvil Awards are presented yearly by the Public Relations Society of the Philippines (PRSP) in recognition of excellent campaigns that impact society.

PSBank took home a Gold Anvil for its long-running financial literacy programs – Good to Know and Be Aware, which have proven to be effective public awareness campaigns in informing and educating its customers, as well as the general public on how financial resources work and how their hard-earned money can be protected from fraudsters. These campaigns are also in strong support of the Bangko Sentral ng Pilipinas’ Financial Consumer Protection (FCP) efforts.

The Bank was also given a Silver Anvil for its “Innovating to Lead” themed 2018 Annual Report, which garnered impressive feedback from its more than 700,000 stakeholders post-distribution, testament to how it successfully transformed and injected an innovation mindset in its culture.

Another Silver Anvil was likewise awarded to the Bank for its popular PaSend & Mobile Check Deposit TV commercials, which not only surpassed a million views in just a few days after release—but also influenced a significant increase in PSBank mobile app enrolments and transactions in the short period following their launch.

These select awards showcase the Bank at its prime, and point to its continued outstanding efforts and leadership initiatives in the industry—which are all underscored by its purposeful mission to be always the best in offering simple and reliable banking services.