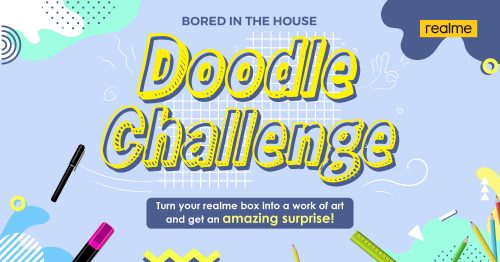 realme Philippines, the lifestyle partner of the youth, invites its fans and followers to rev up their artistic side and let imagination run wild in the #realmeDoodleChallenge to get a chance to win exclusive prizes.

Taking pride in being a brand for the youth, realme Philippines continues to be committed to coming up with ways in keeping the youth entertained and connected while staying safe at home.

The doodle contest takes inspiration from the earlier works of the talented realme community members who have previously shared their creative doodles on the realme smartphone boxes. One of those that garnered much attention is a doodle inspired by the world-renowned Van Gogh masterpiece, Starry Night. Later on, realme Philippines decided that this would be a perfect avenue for the realme squad to showcase their artistry and creativity.

The #realmeDoodleChallenge aims to unleash the youth’s creative potential as they express themselves through fun and quirky doodles. To join, members of the realme Philippines Community are highly encouraged to let colors and creativity flow as they customize their own realme smartphone boxes.

Participants must upload their creative entries on their Facebook account, with the hashtag #realmeDoodleChallenge included in the caption. All posts must be set in public. Two winners will be announced on June 15,2020 on the realme Philippines’ official Facebook page.