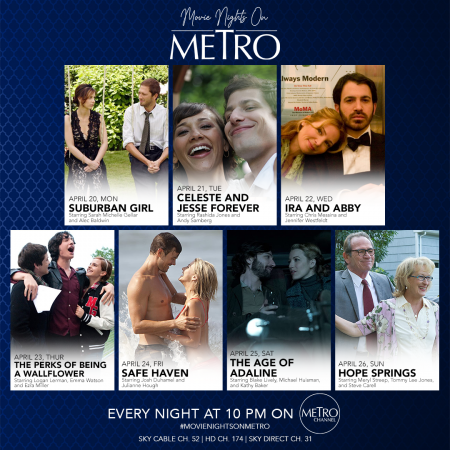 Metro Channel is hosting “Movie Nights on Metro,” featuring a fine collection of rom-coms, romantic dramas, and chick flicks to help ease cabin fever and inspire viewers to fall in love all over again until May 2 (Saturday).

This Tuesday (April 21), join Celeste Martin (Rashida Jones) and Jesse Abrams (Andy Samberg) as they try to navigate life after parting ways as a couple in “Celeste and Jesse Forever.” With the promise that they will stay as best friends while seeing other people, will they be able to really let go of each other or will they eventually get back together?

On April 23 (Thursday), discover the beauty in finding true friendships in “The Perks of Being a Wallflower” with Charlie (Logan Lerman), Sam (Emma Watson), and Patrick (Ezra Miller). The movie, based on the critically-acclaimed novel of the same name, will surely resonate with the youngsters who feel like misfits, but are still trying to live life the best way that they can.

Meanwhile, Meryl Streep fans are in for a treat as her film “Great Hope Springs” with Tommy Lee Jones—about elderly couple Kay and Arnold Soames who participates on a one-week counselling to reignite their marriage—airs on Sunday (April 26).

Finally, for those who are looking to find reasons to fall in love again, catch the story of Dean Pereira (Ryan Gosling) and Cindy Heller (Michelle Williams) on April 30 (Thursday) in “Blue Valentine,” a poignantly beautiful and heartbreaking film where the couple recounts the tale of their courtship, marriage, and estrangement.

Discover what it’s like to fall in love again in the time of quarantine by tuning in to “Movie Nights on Metro,” 10 pm every night on Metro Channel, the home of chic living from the country’s authority in style, Metro. Metro Channel is available on SKYcable channel 52 (SD) and channel 174 (HD), and on SKYdirect channel 31.