Roxanne Barcelo defies the societal boundaries of love and comes to terms with her sexuality as she is forced to choose between an ex-boyfriend and a confident lesbian woman in the laugh-out-loud romcom “Fluid,” which streams on March 13 on iWant.

“Fluid” promises to be just as riotously hilarious as “MOMOL Nights,” the most watched iWant original movie, which was also created and directed by Benedict Mique. With “Fluid,” iWant once again navigates the complicated aspects of love, modern dating, and relationships by using wit and laughter.

The series follows Mitch (Roxanne) and her journey to self-discovery that begins after her breakup with her cheating ex-boyfriend Jacob (Joross Gamboa).

Despite never having been in a relationship with a woman before, Mitch agrees to date women upon the suggestion and encouragement of her friends.

Though unsuccessful at first, she eventually meets George (Ann Colis), an out-and-proud, confident lesbian who challenges Mitch to get away from her comfort zone. Mitch agrees to go on dates with George, and finds comfort and support in her.

When their relationship seems to be progressing nicely, Jacob comes back to ask for forgiveness and woo her back.

Will Mitch choose to forgive and go back to Jacob or will she take a risk and pick George? 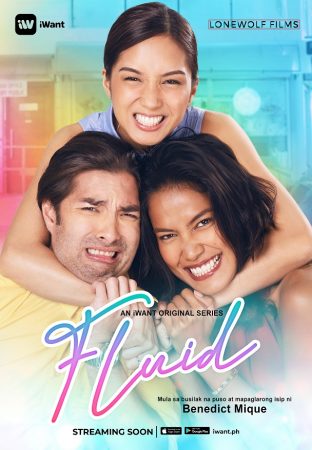 Celebrate all kinds of love on iWant and watch “Fluid,” streaming on March 13, for free on the iWant app (iOs and Android) or iwant.ph.