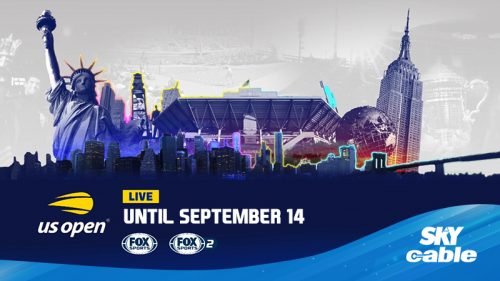 The race for the next 2020 Grand Slam Men‘s title is now wide open with Roger Federer, Rafael Nadal, and now Novak Djokovic not seeing action at the US Open, which airs until September 14 on SKYcable via Fox Sports 1 and 2.

With the big three absent for the first time since 2014, all eyes are now on third-ranked Austrian Dominic Thiem as he seeks his first major title. The world’s number one Djokovic, who was aiming for his fourth US Open title, has exited the matches early.

A major title has been elusive for Thiem. After bowing out early in the 2018 US Open, Thiem met Djokovic in his next Grand Slam match in January 2020’s Australian Open final, which would have led to a crack at the French Open. But with the threat of the pandemic, the French Open has been delayed.

Will the 2020 US Open finally be his Grand Slam moment?

In the Women’s Singles division, America’s finest, Serena Williams, looks forward to ending her three-year Grand Slam drought as she pursues her 24th Majors title. The question is: will the US Open bubble present new challenges for her without the home crowd pumping her up?

Fans can get their daily tennis fix with the US Open 2020 until September 14, live on Fox Sports 1 and 2.

SKYcable subscribers can follow the US Open festivities by adding the FOX Sports Pack for only ₱150/month on their existing plans via SKYcable Select. Visit mysky.com.ph/getfoxsportspack to avail.

To know more about the schedule of matches and channel assignments for the US Open 2020, go to bit.ly/usopen2020.