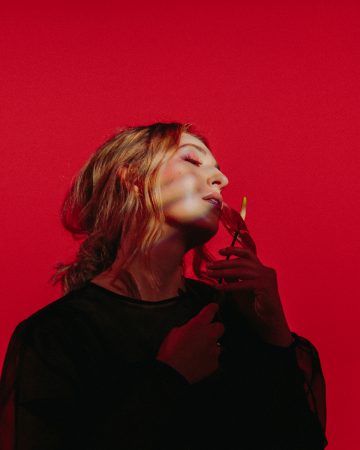 Nashville-based singer-songwriter SVRCINA releases a new video ahead of her debut full-length album.

“‘Flowers’ has been one of the most artistically vulnerable songs I’ve released, and communicating its message visually was truly a new layer,” SVRCINA explains. “Working with Bree Marie Fish (Dan Auerbach, Josie Dunne) on videos for two other singles, I trust her artistic vision and I’m so grateful for how she melts into artists’ creativity, yet crafts and directs each story in such a fresh way. It was really important to communicate the simplicity of seeing and creating beauty in every circumstance. Together, this collaboration and video has been our most colorful, emotional, and purposeful yet.”

Produced by Essancy and co-written by SVRCINA and Andreas Moss, the sparkling new synthpop cut marks the third single from her forthcoming debut full-length album.

Molly Svrcina relocated to Music City from Detroit, Michigan after scoring her first publishing deal at just 13 years old. Now, at 23, she’s written over 500 songs, landing numerous sync licensing placements in the states and abroad (HBO, MTV, The CW), while simultaneously racking up over 27 million Spotify streams on her solo material alone. And while she’s been fortunate enough to write for other projects (including MOTi, Icona Pop, and a new Robin Schulz cut dropping this summer), SVRCINA’s newest material is a brilliant reminder of what can happen when talent blossoms into individual artistry.

“‘Flowers’ is about the beauty that can be seen and created in every circumstance. It’s about clinging to an anchored hope that nothing in and from our lives will be wasted— even the worst, most painful aspects,” she admits. “The truth is that pain and suffering in life are unavoidable. Choosing to search for beauty in everything doesn’t ignore reality, but it believes and resolves that our spirits won’t be eternally crushed or blemished by the valleys we walk through.”