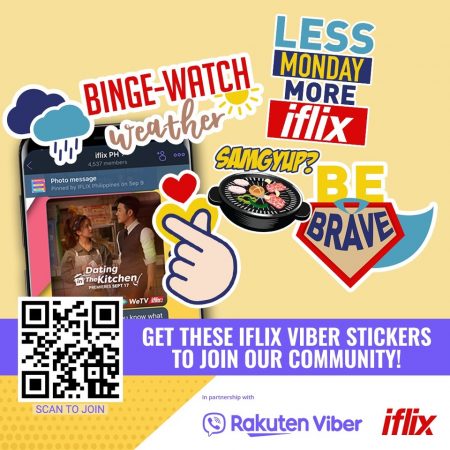 If there is one thing the quarantine has taught us is the value of being part of a community. Viber emerged as everyone’s go-to, as communities for every purpose were born. In fact, Viber communities surged up to 120% in recent months. Leading Asian streaming service iflix supercharges the concept with the recently launched iflix PH Community on Viber. If you want first dibs on the hottest news on what you should be streaming and binge-watching, join now!

The iflix community on Viber hit the ground running with major updates on its latest Asian series and movies, including some of the best K-Drama titles such as Descendants Of The Sun, alongside newly introduced Chinese dramas like The Untamed and Dining In The Kitchen. Among the top-trending news was the release of hit series Bad Genius, and the immensely popular BL series Love By Chance Season 2, and My Gear and Your Gown, all coming out of Thailand. In the mood for some ROTFL Pinoy humor, check out the Anne Curtis and Vice Ganda comedy hit, The Mall, The Merrier, streaming now on WeTV VIP and iflix VIP.

To join the iflix PH community on Viber, click on this link: iflix PH . Or add a touch of fun and personality to your messages by downloading the iflix sticker pack! As an added bonus, you get a chance at three-month access to iflixVIP. Just check out the mechanics and the voucher code in the community’s pinned message.

Looking to add some character (or characters, pun intended!) to your messages, click on the link or scan the QR code and be part of the community now. The iflix x Viber community is only available to Viber Philippines users.

iflix is Asia’s leading streaming platform featuring the best in local, regional, and international content, which can be seen in Indonesia, Malaysia, Thailand, and the Philippines. WeTV is home to Asian Premium content featuring the best shows from China and the rest of Asia. You can download both the iflix and WeTV app on the App Store and on Google Play.