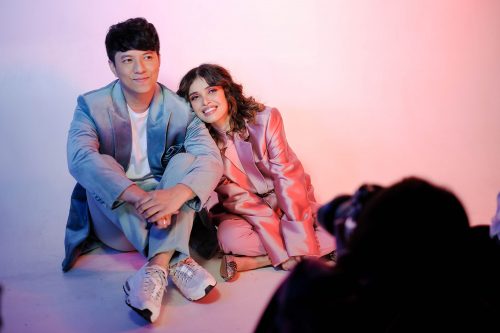 After surprising fans with their wedding revelations with the song “Can’t Wait To Say I Do”, singer/songwriter TJ Monterde and Asia’s Soul Supreme KZ Tandingan celebrates the new chapter of their lives as a married couple with the release of their new song “Simula”. This has been formally announced during a virtual media conference organized by TJ’s music label, PolyEast Records.

Calling the song as a vow, TJ reveals that the song tackles the reality of marriage and how couples must be reminded why they decided to be one. “Ito ang panata naming para sa isat-isa, kasi we know na after ikasal ang isang couple, it’s not always (about) fairytale after that… (na) if ever at some point ay makita naming ang dulo, pipikit na lang kami at babalik sa simula.”

Accordingto TJ, the emotional ballad has been one of his most personal pieces he has written because he co-wrote it with KZ and speaks so much of their promise to one another and the commitment they took before the eyes of God.

KZ added “Marriage is not just your commitment to the other person but a commitment to God. Kaya namin siya sinulat is to remind ourselves (na) when difficult times come, we will remember our vow and why we even started and yun yung ang magbabalik sa amin sa simula.”

Celebrating love during a difficult time and recording the new song has also been a challenging stage for both but collaborating with their friends in the industry made the experience a lot easier and more personal to them. The song was arranged by a close friend to the couple, Jem Florendo; the guitar track was recorded by TJ’s best friend Macoy Portado, and vocal arrangement was done by one of their ‘ninangs’, Yosha Honasan.

On October 29, Simula’s music video was shared on TJ Monterde’s YouTube channel and featured the touching moments during their unforgettable day as directed by Jason Magbanua.

TJ and KZ revealed their wedding details to the public via a live chat organized for their supporters which coincided with the release of the music video for “Can’t Wait to Say I Do” under Star Music. They tied the knot in an intimate celebration in Batangas on August 28, 2020 and was witnessed by family and closest friends.

“Simula” and “Can’t Wait To Say I Do” are part of the newly released EP titled “Simula” which is now available on all digital music streaming platforms. Two more songs from TJ and KZ are set to be released by the end of 2020 as confirmed by TJ’s music label, PolyEast Records. All proceeds from the songs will go to Inspire Church Metro, which provides assistance to those who have been affected by the pandemic.