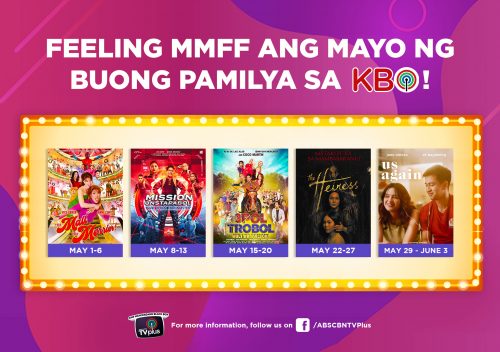 TVplus viewers will soon be able to catch the hit 2019 MMFF movies of Vice Ganda and Anne Curtis-Smith, Vic Sotto, and Coco Martin this May.

Anne Curtis and Vice Ganda team-up in the comedy film “The Mall, The Merrier,” which airs on May 1. The Star Cinema film tackles the story of siblings Moira (Vice) and Morissette (Anne), fighting over a mall they got from their parents.

Vic Sotto, on the other hand, stars in a Pinoy heist movie in “Mission Unstapabol: The Don Identity.” The comedian plays Don Roberto, an ex-convict who wants to clear his name after his brother Benjie (Jose Manalo) framed him and stole an important pearl in a museum. To execute his plans, he recruits his driver, Kikong (Jelson Bay), failed boxer Johnson (Jake Cuenca), failed magician Zulueta, (Pokwang), stunt double Bruno (Wally Bayola) and the mysterious hacker Donna(Maine Mendoza). Catch this on May 8.

Meanwhile, Coco’s MMFF entry airs this May 15, where he plays Pol, a bodyguard who becomes a suspect in his boss’ death. He now needs to find the true killer and at the same time protect Trina (Jennylyn Mercado), his boss’ daughter.

Aside from fresh MMFF movies, KBO viewers can also catch the horror film “The Heiress” this May 22. Maricel Soriano plays Luna, a mambabarang who will do anything to keep her niece, Guia (Janella Salvador) safe. Things suddenly change for Guia as her friend Renz (Mccoy de Leon) and her mother (Sunshine Cruz) enter her life.

RK Bagatsing and Jane Oineza‘s first movie together, “Us Again” also premieres on May 29. It tells the story of Margie (Jane Oineza) and Mike (RK Bagatsing), whose lives get entangled when Jane’s character gets to live with Anne, girlfriend of Mike. Witness how they play with fire and enter a complicated relationship.