ABS-CBN Foundation’s Sagip Kapamilya is relentless in bringing help to Filipinos in need after several typhoons devastated different parts of the Philippines.

While still serving victims of Typhoon Rolly, the group has also trooped to areas badly hit by Typhoon Ulysses, together with the ABS-CBN News Public Service Team, to deliver relief packs and provide hot meals for thousands of affected families.

As rains and winds brought chills to people on November 12, the Sagip Kapamilya Soup Kitchen served food to over 4,360 families at evacuation centers in Bagong Silangan, Quezon City.

Around 480 individuals in J.P. Rizal, Makati also received hot meals on November 13, while relief packs were distributed to 1,165 families in San Mateo, Rizal and 987 families in Rodriguez, Rizal. The News Public Service team also went around Montalban, Rizal to bring relief packs to hundreds of families that had to leave their homes due to the floods.

With the help of donors and partners, the relief operations of Sagip Kapamilya will continue in these areas as well as in Albay, Batangas, and Quezon province, which are still reeling from the impact of Typhoon Rolly.

In a recent interview on “Magandang Buhay,” ABS-CBN Foundation Director for Program Operations Jen Santos once again appealed to Filipinos to offer help to our kababayans in their own way. 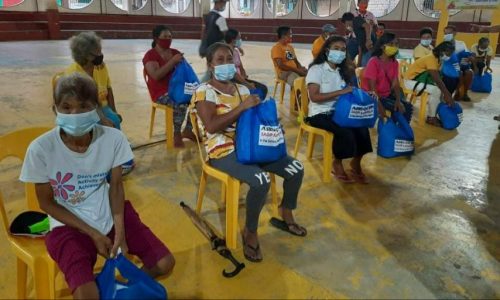 She also recommends cash donations as these are not only safer to transmit during a pandemic but will also allow them to work faster as they would just purchase the products for relief packs from local sources. They are also able to help local farmers, she added.

Nevertheless, in-kind donations, such as rice, canned goods, water, blankets, and hygiene kits, which are very much needed in evacuation centers, are most welcome.