AirAsia Philippines is giving its 12,000 UNLI Flight Pass holders great value for money and great ease for future travel as redemption for the promo has been extended until 2022! 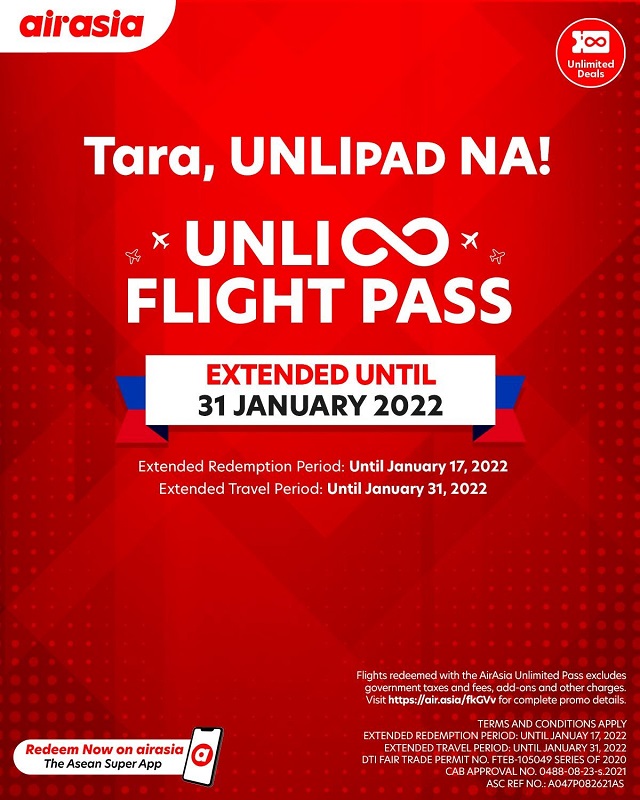 UNLI Flight Pass was tremendously welcomed by travel enthusiasts, mostly young professionals and families during its launch in November 2020.  It has also become the travel partner of essential travelers and Authorized Persons Outside Residence (APOR) such as medical frontliners and members of the uniformed services like different branches of the Armed Forces of the Philippines (AFP), Philippine National Police (PNP), Philippine Coast Guard (PCG), Bureau of Fire Protection (BFP) and Bureau of Jail Management and Penology (BJMP).

AirAsia Philippines Spokesperson Steve Dailisan said, “The extension of the UNLI Flight Pass will give APORs the opportunity to maximize and save for their essential travel. It also gives leisure travelers the chance to regain halted travel plans especially during Ber months where a lot of homecomings and family vacations happen.

To date, more than 5,400 flights were booked using the UNLI Flight Pass. While most redemption concentrated on leisure destinations such as Boracay, Cebu and Bohol, AirAsia reminds the public that the promo is open to all their domestic destinations including Davao, Cagayan de Oro, Zamboanga and General Santos City.

National Triathlete Nikko Bryan Huelgas was among the many travel enthusiasts who purchased the UNLI light Pass last year. Huelgas said, “As an athlete ang laking tulong ng Unli Pass for my trainings in the various provinces.”

“Though you really have to manage your travel plans, it was really worth it because I was able to book 2 round trip tickets to Cebu and Tacloban already, which was more than what I paid for.  I plan on visiting Palawan and Bohol but the plan was sidelined because of the travel restrictions.  So extending the promo is like an early Christmas gift.”

AirAsia’s efforts by going above and beyond the protection of its passengers against COVID-19 have earned the airline a perfect 7-star rating from Airlineratings.com.