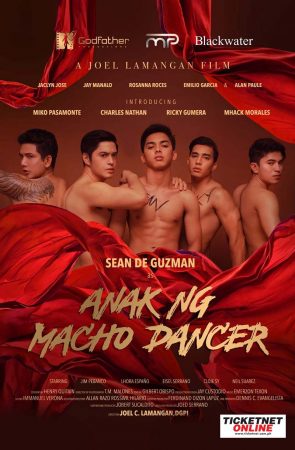 TicketNet is bringing one of the most awaited Filiipino films of the year directly to you! Grab your tickets to the digital premiere of the hotly anticipated Filipino film Anak ng Macho Dancer through TicketNet today and enjoy the film from the comfort of your own home!

The film, which will be streamed only on January 30, 9PM is a sequel to the 1988 cult classic “Macho Dancer” which was directed by the legendary Lino Brocka. The 2021 sequel, which is now helmed by the equally acclaimed director Joel Lamangan centers on the story of Inno (Sean De Guzman) who is forced to enter a life of prostitution during the height of the pandemic to save himself from the cruelty of his father. In search of life’s comforts, he builds a relationship with a rich businessman who turns out to be a psychopathic sexual sadist that kills people for pleasure.

Don’t miss out on this limited event! You can purchase your ticket to Anak ng Macho Dancer for just ₱690 by visiting this link.