Alfamart, the first and only Super Minimart chain in the Philippines, has had quite an admirable rise from obscurity. From the fledgling first store in Trece Martires, Cavite in June of 2014, it has grown to over 1000 stores in a span of seven years.

This achievement was the result of a number of factors. Surely, being partnered with a retail luminary such as SM Investments Corporation (SMIC) was a significant facet to their success. However, Alfamart Philippines COO Harvey T. Ong credits the brand’s accomplishment to Alfamart’s people-centric culture and its people. “Since we started in the Philippines, we made sure to adopt the core values of the founders of Alfamart and SM,” Ong said.

Ong was referring to Alfamart founder Djoko Susanto, a self-made billionaire and one of the top Indonesian entrepreneurs, and the late Henry Sy, Sr., founder of SM.

Both men had similar rags-to-riches stories. In the same way that Henry Sy Sr. started SM by selling borrowed shoes from a store and turned it into what it is today, Djoko Susanto started Alfamart in 1999 and was able to make it grow from a single store into more than 17,000 all over Indonesia today.

The founders are the constant inspiration of every Alfamart staff member as they serve their customers. 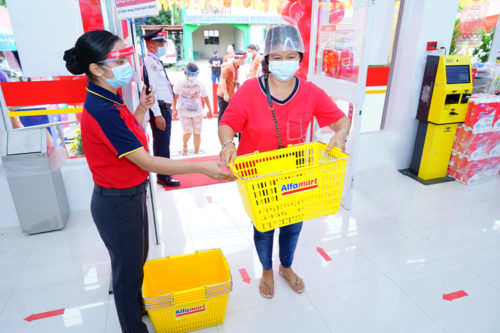 COVID-19 and the ensuing lockdowns failed to stop Alfamart’s expansion, and a lot of that is attributed to the dedicated Alfamart staff–from management to store frontliners. Alfamart took measures to keep its employees safe, especially at the height of the pandemic: free shuttle service, WFH arrangements, reassignment of staff to closer branches and many others. “It is important to care for our staff because the employee experience and the customer experience are directly linked,” said Charity Trinidad, Alfamart’s Assistant Vice President for Human Resources. “We have to look out for our employees so they can provide excellent customer service,” she added.

Charity knew very well the challenges of keeping employees motivated. “Empathic Leadership is important for leaders of any organization to have. Leaders should be able to understand the people under their charge, their needs, feelings and thoughts,” she said. “Part of the importance of empathy in leadership is being able to provide emotional guidance and encouragement to their team members,” she continued.

To ensure that team members stay connected, Alfamart launched an online platform called AlfaCares. It allowed staff from even the far-flung stores to be heard and be guided through tough times, whether it be their personal or professional struggles.

Alfamart also pivoted in their training and quickly adopted e-learning to continuously upgrade their staff’s skills.

Technology was equally crucial in ensuring that communication remained seamless during times when Alfamart employees worked from remote locations, outside of the corporate offices. Lerry Sangalang, Alfamart’s AVP for Information Technology (IT), realized this when he was suddenly thrust into the forefront and had to rely on both his leadership and technological skills. “My team relied on me more to guide them during these uncertain times. I realized that little acts of kindness to one another or going the extra mile went a long way for others,” he said.

“As we look back at the seven years that we’ve been serving the communities, we believe that leadership values imparted to us by Alfamart and SM’s founders guided us through the toughest times. These values will continue to guide us in serving our communities better,” Ong concluded.