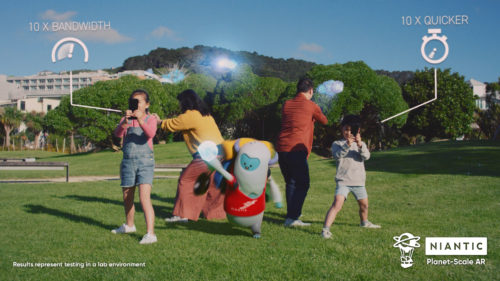 Globe Telecom is set to revolutionize 5G and augmented reality (AR) gaming with their latest multiplayer demo experience, Codename: Urban Legends. Partnering with Niantic, the Philippines will be the first in Southeast Asia to experience the software development giant’s newest gaming innovation.

Codename: Urban Legends is a multiplayer demo that revolves around casting magic spells to blast monsters and rescue mythical allies, including Doty, the original Niantic Explorer. The game is built on the same platform which powers Niantic’s signature titles like Ingress, Pokémon GO, and Harry Potter: Wizards Unite.

In the early days of AR gaming, players are usually trapped within their phone: a single reality that could not be shared with others but with 5G, you are now able to share an identical view and experience with others playing the same game.

“This will create a strong community of players, who can share the same augmented reality experience and interact with the same characters from their own phones—a feat impractical on 4G or Wi-Fi,” says KD Dizon, Vice President for Globe Consumer Mobile Business. “Thanks to the astounding capabilities of 5G technology available on Globe Telecom, playing games like Codename: Urban Legends on your mobile device allows you to get reeled into a more immersive gaming environment—a stable, lag-free experience.”

The partnership of Globe Telecom and Niantic was borne out of the telco’s exclusive membership in Niantic’s Planet-Scale AR Alliance which aims to enable experiences across mobile devices and AR wearables. “Through this, we will be able to give our subscribers entirely new ways to interact with the world and the people around them,” said DC Dominguez, Head of Globe Games and Esports at Globe Telecom.

Globe Telecom is a pioneer in 5G technology in the Philippines. It offers fiber-fast speeds of up to 900mbps, that is up to 20x faster than LTE speeds. With 84% coverage in NCR and more sites nationwide, streaming, gaming, audio/video calls, and mobile connectivity are better than ever before.

“Early global network testing showed 5G’s true capabilities: a 10x improvement of latency and the ability to handle up to 10 times as many simultaneous players, thanks in part to a new form of data processing called multi-access edge computing or MEC. It drives down lag time and helps manage AR content on a massive scale by decentralising the cloud-allocating resources closer to the gamers so they can enjoy more stable performance” said Emmanuel R. Estrada, Senior Vice President for Technology Strategy & Service Integration. “5G is the core and the future of AR. Users can expect 5G to enable more capabilities which will enhance the gameplay experience in the future.”

Lazada | Empowering businesses to deliver benefits and value to consumers