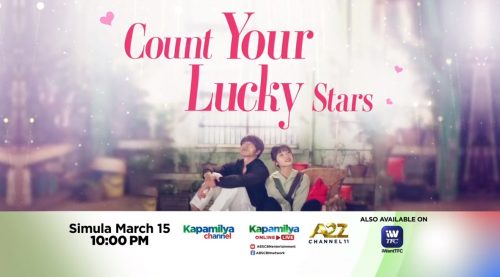 The 2020 romcom fantasy drama series follows Calvin Lu (Jerry), an attractive and well-respected fashion designer who has life figured out despite being a snob. Andi Tong (Shen), on the other hand, is a struggling fashion designer whose bad luck doesn’t seem to run out. However, tables turn when they bump into each other, resulting to a reversal of fates.

“Count Your Lucky Stars” was first streamed in the Philippines via iWantTFC recently. It currently is in the top 10 list of most watched series on iWantTFC.

Even before it became available on the streaming platform, it already sent netizens abuzz after a photo of Jerry Yan from the show while sitting in a bath tub went viral on social media. Many said the actor seemed to have not aged since he took the country by storm when he played Dao Ming Si in the phenomenal Taiwanes series “Meteor Garden.”

Besides iWantTFC, the hit series will also be available on Kapamilya Online Live on Facebook and YouTube once it airs on TV.