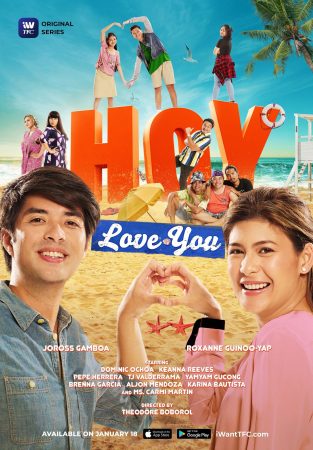 The popular loveteam of Joross Gamboa and Roxanne Guinoo-Yap, known as ‘JoRox,’ will once again bring ‘kilig’ and good vibes to their fans in their reunion project, the iWantTFC original series “Hoy, Love You!” which streams for free worldwide on January 18.

Joross and Roxanne are both excited for viewers to watch their romantic comedy series, where they play single parents who unexpectedly find love.

“This project is very different from our previous ones during our SCQ (‘Star Circle Quest’) days. It is more appropriate for our age while still maintaining a level of ‘kilig’ and a sense of maturity. We will not only entertain viewers but will also try to inspire families, kids, and single parents who want to find love again,” Roxanne shared in the digital talk show “The Best Talk.”

Joross also added, “What’s interesting about this series is that the topic is mature in its nature, but the series is full of humor at the same time. The audience will also have a better understanding of the story since the approach is light-hearted… It will impart lessons and will serve as an eye-opener to viewers.”

In the series set in Lobo, Batangas, Joross and Roxanne portray Jules and Marge, single parents who are in pursuit of their personal dreams in life for themselves and their respective children.

After losing his wife in an accident, the fun-loving probinsyano Jules focuses on his job as a contractor and encourages his daughter (Brenna Garcia), to finish her architecture course so that they can work together and live a comfortable life. Meanwhile, Marge is a career-centric interior designer from Manila whose dream is to put up her own design firm. She is also a hands-on mom to her 16-year-old son Charles (Aljon Mendoza).

Due to an accidental encounter, Jules and Marge meet but only develop a close relationship when they are both assigned to work on a construction project together in the province.

Just when the two are falling in love with each other and are ready to bring their families together, their relationship hits a roadblock when Marge’s wealthy ex-boyfriend named Richard (Dominic Ochoa), who is also the father of Charles, returns in her life to win her back.

Will the kids of Jules and Marge approve of their relationship? Will Marge choose to rebuild her family and live a more stable life with Richard or will her love for Jules prevail?

“Hoy, Love You!” has six episodes and will start streaming for free on the iWantTFC app (iOs and Android) or on iwanttfc.com on January 18, with daily episodes dropping at 8 PM until January 24. Viewers can also enjoy watching on a bigger screen through select smart TV brands, ROKU streaming devices, and Telstra TV for global users. For the complete list of compatible devices, sign in instructions, and account activation, visit https://iwanttfc.com/help#tfc-on-smart-tv.