For most Filipinas, the phrase ‘Kababae mong tao…’ is a statement that they have probably heard at least once in their lives. It’s a seemingly harmless remark that aims to put them in their place, a reprimand that tells them what they should and should not do. And while society has over time become more progressive, we still have a long way to go in addressing this deeply-ingrained and unconscious discrimination – one that inhibits women from realizing their full potential.

Coca-Cola Philippines believes that the place of a woman is anywhere and anything she wants to be. And this Women’s Month in the Philippines, Coca-Cola is re-appropriating ‘Kababae mong tao…’ by re-telling and re-casting the narrative in an inspiring way. Coca-Cola’s simple yet powerful online film advocates for uplifting women and fighting against gender biases. The film features women from different walks of life who choose to challenge societal norms by showing how their perceived ‘faults’ are actually their strengths. As such, the film celebrates the very traits that make them who they are whether it is a ‘brusko’ drummer, a ‘palaban’ photojournalist, and more. 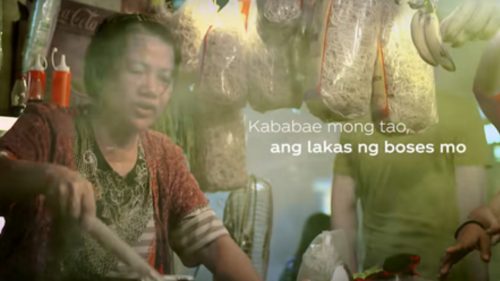 One of the women in the story is the ‘loud’ carinderia cook, a woman who tirelessly calls to passersby as she sells her dishes to provide for her family. The carinderia owner represents many other women with untapped entrepreneurial potential whose ventures are sometimes seen as small and insignificant. Within their homes, they are also oftentimes relegated to the role of housekeeper and caretaker because of the outdated belief that it’s their duty as women.

Contrary to common assumptions, businesses like sari-sari stores and carinderias actually make up a whopping 88% of the total MSMEs in the country, with women contributing to 35%-40% to the Philippine economy.

Recognizing the important role of women in society and in the economy, Coca-Cola set a decade ago its ambitious “5by20” global goal of economically empowering 5 million women entrepreneurs by 2020. Localizing this goal to the needs of Pinays, Coca-Cola Philippines partnered with the Technical Education and Skills Development Authority (TESDA) to create the Sari-Sari Store Training and Access to Resources (STAR) program – a comprehensive program designed to unleash the potential of women micro-entrepreneurs.

The STAR Program begins with a gender sensitivity module designed to help women understand that they are free to go beyond the roles placed upon them by society or by their families. This important module shows them who they can be beyond ‘mother’ or ‘wife’ and inspires them to pursue their ambitions and aspirations.

Once this seed of confidence has been sown, the trainees flourish further with modules that tackle simple yet effective practices that allow their businesses to grow.

The 5by20 initiative of Coca-Cola also goes beyond the STAR Program, with off-shoot programs like Women’s REACH, a program created to assist overseas Filipino worker (OFW) women in their economic reintegration upon returning to the country; and STAR Rebuild, an initiative that focuses on supporting the rehabilitation of micro-enterprises in disaster affected areas.

With the pandemic’s impact on businesses and livelihoods across all sectors, Coca-Cola also launched its OFW Re-Integration through Skills and Entrepreneurship Program or OFW RISE program which equips repatriated overseas Filipinos with entrepreneurial skills and capital necessary to start their own businesses, and its Rebuilding Sari-Sari Stores Through Access to Resources and Trade or ReSTART program which provides safety educational materials, products and much-needed capital to help them recover and restart their businesses in the new normal.

Coca-Cola’s commitment to gender parity also extends to its own associates. Since 2019, Coca-Cola Philippines achieved its goal of 50-50 gender parity across all levels of management, with 57% of the local senior leadership roles held by women. At the same time, an increasing number of women have been taking on previously male-dominated positions and departments in its manufacturing plants. This increase in female plant managers, engineers, logistics officers, and leaders is a testament to the commitment of Coca-Cola Philippines in enabling women empowerment, diversity and inclusivity in the Philippines. Recently, Coca-Cola was awarded with the Gender-inclusive Workplace and Community and Industry Engagement Award during the UN Women 2020 Asia-Pacific Women Empowerment Principles (WEPs) Awards. This award-giving body recognizes exemplary business practices for gender equality aligned to the UN Women, UN Global Compact’s WEPs, and the UN’s Sustainable Development goals.

To further its commitment to gender and diversity, Coca-Cola also recently signed the United Nations’ Women Empowerment Principles that offers guidance on how to empower women in the workplace, marketplace, and the community.

Since 2010, Coca-Cola Philippines has believed in the dreams of women and the company’s various 5by20 programs have helped to positively transform the lives of 244,207 Filipina entrepreneurs in 81 provinces. With Coca-Cola having now met and exceeded its 5by20 goals locally and globally Coca-Cola Philippines aims to go beyond and empower even more Filipinas in this new decade and beyond.

Join in the celebration of Women’s Month with Coca-Cola Philippines and see how these empowered women choose to challenge the #KababaeMongTao statements in society. Watch the film here and share your own story of how you broke away from unconscious gender bias.