Aiming to recognize outstanding contributions of Filipino musical works, creators, institutions, and researchers across genres and modes of productions with the highest standard and artistic excellence, the National Commission for Culture and the Arts is launching the 1st NCCA SUDI Awards. 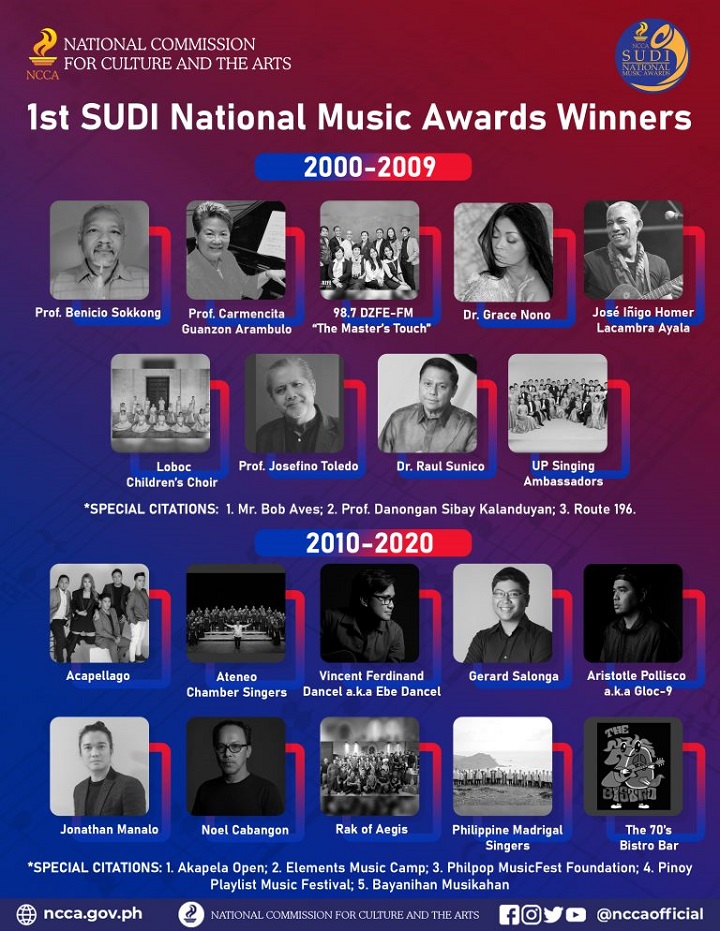 For its launch year, 2020, the SUDI Awards will recognize and honor the nineteen (19) most outstanding musical achievements (whether artist, musical piece, journal, music cultural worker, or music institution, but not limited to) that defined the last 20 years or past two decades.

The awarding ceremony for the 1st NCCA SUDI Awards will be livestreamed via NCCA’s official Facebook page and YouTube channel (@NCCAOfficial) in two parts on August 21 and August 28 at 7PM.

A credible jury was tasked to review the body of work and/or significant contribution of the nominees’ that ultimately formed the nineteen (19) significant musical achievements that defined Philippine music during the years 2000-2019 while still adhering to the highest standards of excellence (in form and in content) and even in audience reception and patronage.

In succeeding years, excellent and significant musical contributions (whether artist, musical piece, journal, music cultural worker, or music institution, but not limited to) shall be recognized triennially.

Learn more about the NCCA SUDI National Music Awards and the list of awardees. Visit: https://ncca.gov.ph/2021/02/02/ncca-sudi-awards/