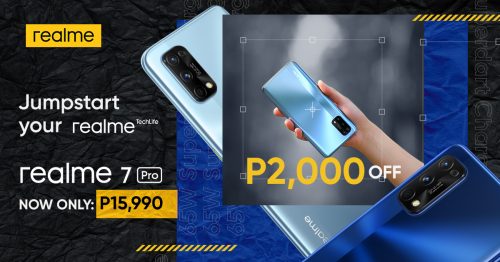 To boost the realme TechLife experience that is about to be launched in the country, the no. 1 smartphone brand realme Philippines is dropping the price of one of its most powerful smartphones, the realme 7 Pro, by Php 2,000 starting February 26! The midrange champ now retails for only Php 15,990 in the official flagship stores of realme Philippines on Lazada and Shopee, and in official realme dealers and stores nationwide.

With its sharp camera quality headlined by a 64MP quad-camera module, and large-capacity 4,500mAh battery supported by a 65W Super Dart charging technology, the realme 7 Pro is now truly all set to empower digital natives, content creators, and gaming champions to achieve success in their respective online endeavors.

“As we welcome the realme TechLife locally, we make one of our most powerful devices much more attainable for Filipinos. More Filipinos can now enjoy next-level midrange performance and the digital experience promised by interconnectivity with the realme 7 Pro! Go and slay your social media game and mobile battles with this powerful device,” shares Austine Huang, VP for Marketing at realme Philippines.

No more wall-hugging, charge in 34 minutes

The wave of fast-charging technology has taken the smartphone industry by storm. As a pioneer on this front, realme made sure to power its young users with a top-notch 65W SuperDart charging capacity in the realme 7 Pro, letting them off of prolonged stays near a charging port. The realme 7 Pro only takes 34 minutes to fully charge its 4,500mAh battery. Users are assured to spend more time with the phone rather than charging cables!

With the increasing number of virtual meetings and social media interactions brought by the pandemic, the realme 7 Pro’s 32MP in-display front camera can help users engage with colleagues and followers with clarity.

The realme 7 Pro is the latest in realme’s number series. It was launched alongside the realme 7 and 7i in towards the end of 2020. Just like the smartphones in its line-up, the realme 7 Pro was welcomed warmly by tech experts in the Philippines, lauding the phone’s charging capability and quad-camera set-up.