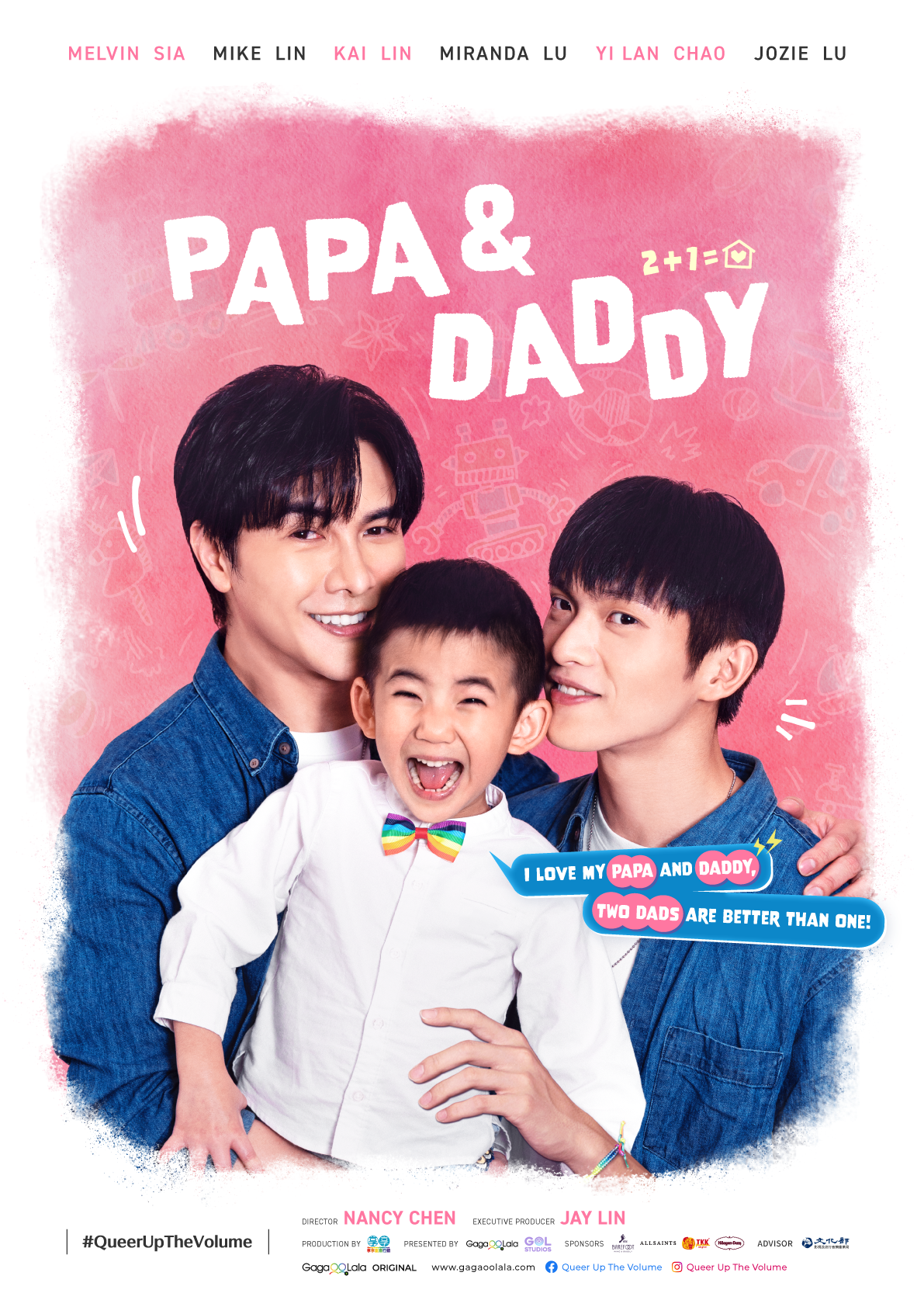 The series follows Damian (Melvin Sia), a 38-year-old overseas Taiwanese and recent divorcé, who returns to Taipei to open his dream restaurant, Verso. While at Verso, Damian meets and falls for Jerry (Mike Lin), a 28-year-old YouTube vlogger. As their relationship progresses, Damian wishes to start a family with Jerry but Jerry is reluctant to take on parental duties at such an early age. However, four years later and through surrogacy, Damian and Jerry officially become gay parents to their four-year-old son, Kai Kai (Kai Lin). Amidst all these developments, Jerry is still yet to come out to his parents, who live in rural Hualien and finds himself increasingly pressured by them to get married to a woman.

Papa & Daddy stars the two-time recipient of the Malaysia Golden Awards, Melvin Sia (Romantic Delicacies, Love Destiny, V-Focus), and rising Taiwanese actor, Mike Lin (Love & TT, The Outsiders). The production marks their first time taking on the role of gay characters on screen. At a press conference on April 21st, Melvin Sia declared, “I am highly honored to have had the chance to take on the role of Damian and have done my level best to rightfully portray his character. While much of the world is gradually becoming accepting of the LGBTQ+ community, it is clear that Asia is largely lacking behind. There is barely any LGBTQ+ content that makes it to the theaters or mainstream television especially from where I come from in Malaysia. Thus, with Papa & Daddy and GagaOOLala, I genuinely believe we can reach out to a larger online audience and ultimately, amplify the message of love and acceptance, diversity, and equality for all, regardless of one’s sexual orientation.” 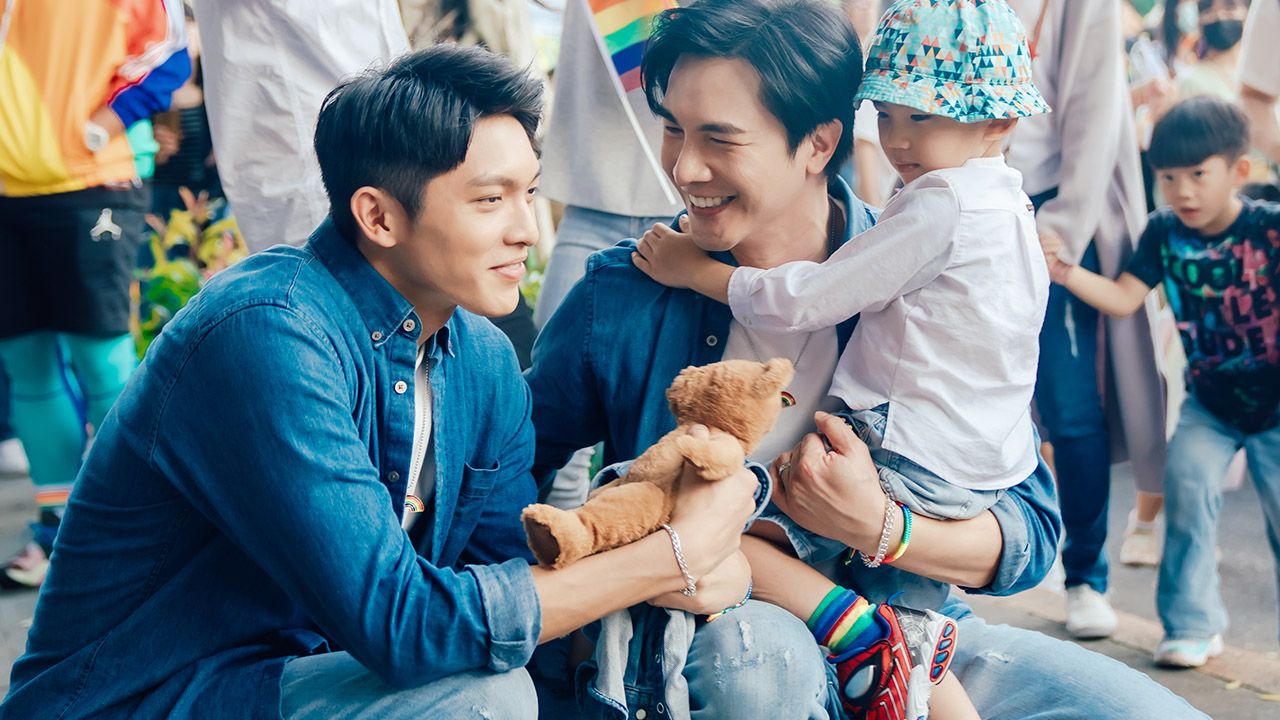 The story behind the series is inspired by the life of Mr. Jay Lin, the founder and CEO of GagaOOLala, and Lin’s personal experience of being a gay dad and raising two children of his own. In fact, Mr. Lin and his partner, who had their kids via surrogacy, serve as the inspiration for the characters of Damian and Jerry as the main leads in Papa & Daddy. “As a gay parent myself, I have heard people question whether children raised under LGBTQ+ households could grow up physically and psychologically healthy. I see Papa & Daddy as a personal opportunity to help shape the narrative on the modern family and in the process assist LGBTQ+ individuals who have contemplated starting a family,” said Lin.

With Papa and Daddy, Nancy Chen, Taiwanese director (Big Three Dragons, HIStory4) and screenwriter (A Taiwanese Tale of Two Cities, 2018), brings to life a tale that centers around a gay couple raising a child together, and the joys and challenges that come with juggling the obligations of family, work, romance, and, ultimately, societal acceptance. Chen says, “While there is a lot of LGBT-related content that talks about the hardships of starting same-sex parented families, there is little or absolutely no content focusing on the roles and responsibilities that come with being a gay parent. We hope the series will help showcase the challenges of gay parenting but also celebrate its new beginnings.”

Elsewhere, the drama series features scenes of its cast participating in the Taipei LGBTQ Pride 2020, the world’s biggest in-person pride parade of 2020 amid the global COVID outbreak, and a year into the historic legalization of same-sex marriage in Taiwan. “Getting to attend the Taipei pride and being a part of the joyous celebrations as gay parents along with little Kai has been a memorable experience for the both of us, one that we will truly cherish,” Melvin and Mike collectively commented during the press conference. Both actors also lend their voices to the series’ theme song “Merry Together”.

The series is the second installment in GagaOOLala’s anthology “Queer Up The Volume”, a collection of original queer love stories, each with its own title song and music video, aiming to portray different facets of contemporary queer life and its issues. The project received a subsidy from the Bureau of Audiovisual and Music Industry Development of the Taiwanese Ministry of Culture. Other director’s involved in the project include Kuang-Hui Liu (Your Name Engraved Herein), Cheng Hun-i (The Last Painting, As We Like It) and Nelson Yeh (A Taiwanese Tale of Two Cities). The visual design concept of the anthological project was developed by multi-awarded Taiwanese graphic designer Joe Fang (方存中), visual director of recent Golden Bell Awards, Golden Melody Awards and Golden Horse Awards ceremonies. All projects will premiere on GagaOOLala during 2021.