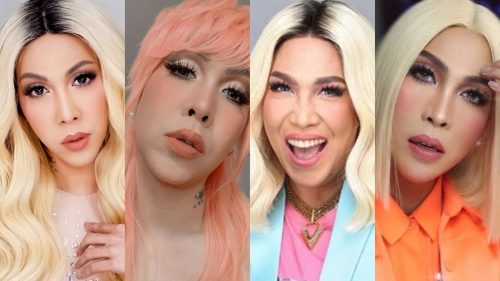 Starting her career on comedy bars and as an on-screen comedian in various noontime shows, Vice Ganda  has slowly evolved into a multi-awarded performer making her the Unkaboggable and Phenomenal Box Office Superstar today.

Vice Ganda already released three solo albums (Lakas Tama (2011), Vice Ganda (2013),  #Trending (2016)) to accompany his top grossing films, eight of which became the highest-grossing in Philippine cinema history. In  2016, Vice launched her first book titled “President Vice: Ang Bagong Panggulo ng Pilipinas“, which sold more than 100,000 copies since it was launched. Her most recent book, “Tutoy: Ang Fantastic Kwento ng Vaklang Twoooo!!!” was released in 2019, where she shared snippets about her life as a young lad who grew up in Tambunting Street, Manila.

Aside from hosting the top-rating noontime show, “It’s Showtime”, her fans can also sing their hearts out with Vice Ganda in “Everybody, Sing!,” an original Pinoy game show where 25 contestants work together for a chance to win the P500,000 jackpot prize.  The show airs every Saturday and Sunday at 7:00 pm on A2Z, Kapamilya Channel, Kapamilya Online Live, iWantTFC, at TFC.

What keeps Vice Ganda even busier is her first-ever digital comedy concert, “Gandemic: The VG-tal Concert,” airing worldwide this July 17 (Saturday) at 9:00 PM and July 18 (Sunday) at 11:00 AM on SKY Pay-Per-View.

This one-of-a-kind concert experience will be filled with spectacular music and dance numbers from Vice Ganda herself. “Gandemic” promises a unique concert experience as it dishes out laughter to everyone’s homes with his hilarious gags and antics. 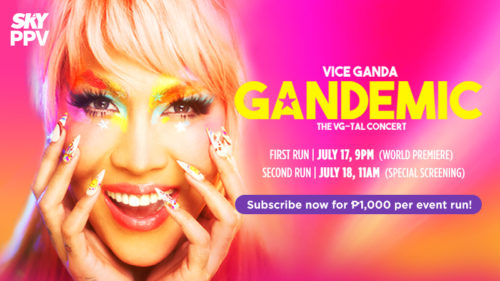 “My concert is like a musical. There will be dance and singing performances, but 90 percent of it will be comedy. That’s what is unique about this concert. There is comic relief,” Vice Ganda shared in an interview.

Don’t miss the unkabogable virtual event of the year in the comfort of your homes as Vice Ganda’s “Gandemic: The VG-tal Concert” airs in high-definition and commercial-free on SKY Pay-Per-View on July 17 and July 18.

Pay-per-view passes are now available for only P1,000 per event run. Visit mysky.com.ph/skyppv or text SKY PPV <Account No.> to 23662 to avail of your concert pass.