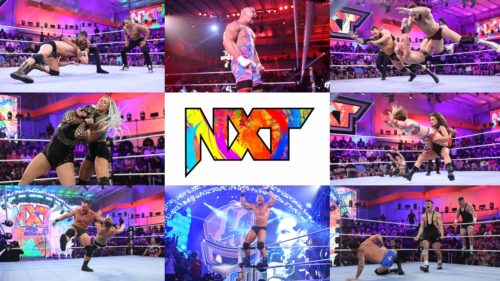 The revamped version of the black and gold brand has been unveiled to the WWE Universe, giving fans a brand-new logo and color scheme. Accompanying this new era of the NXT brand comes the coronation of a new NXT Champion.

Once again, LA Knight’s mouth wrote a check that proved incredibly hard to cash. A backstage run-in with NXT newcomer Bron Breakker resulted in a highly physical match before the Fatal 4-Way NXT Title clash. Breakker showed up and showed out with an incredible physical display that ended with a jaw-dropping press and slam for the win in his debut.

Josh Briggs & Brooks Jensen were focused on matching the aggression of the veteran duo Imperium in their debut. After a distraction of Jensen, Fabian Aichner followed up with a crushing suplex to secure the win over the debutantes.

B-Fab was born for the moment, and there was no way she was backing down from a fight. In her in-ring debut, B-Fab looked poised for greatness, as a devastating win caught the attention of Legado del Fantasma and Elektra Lopez specifically.

Carmelo Hayes is ready to unleash a whole new side with Trick Williams now by his side. The tandem talked the talk and then walked the walk by punishing Duke Hudson.

The initial showdown was derailed and ruled a disqualification as a new-look Mandy Rose rushed in to level the charge of Kacy Catanzaro & Kayden Carter. The match restarted as a Six-Woman Tag Team clash, and Rose exerted her will once again with a crushing knee to Carter for the win.

There was no remorse, just pain delivered by Ridge Holland against Drake Maverick. The bruiser from Yorkshire finished off his outgunned opponent with some Northern Grit to make another punishing statement.

The Creed Brothers continued their path of destruction with another jaw-dropping display of strength. Julius & Brutus dispatched of Dan Jarmon & Trevor Skelly in impressive fashion with unbridled brutality and one final clothesline for good measure. After the match, Malcolm Bivens and The Diamond Mine introduced Ivy Nile and delivered a message for Kushida and the rest of NXT.

After Pete Dunne and Ridge Holland attacked Kyle O’Reilly, Mr. Regal tapped on the newcomer Von Wagner to fill the void in the Fatal 4-Way. Von Wagner impressed throughout, as all four competitors left it all on the mat. The final moments devolved into chaos as LA Knight planted Pete Dunne with a Superplex followed by a slam from Von Wagner to Knight, but The Blackheart had the final say with a Fairytale Ending to Knight that brought Goldie home.

Indi Hartwell and Dexter Lumis said “I Do”

In a beautifully eerie ceremony, Indi Hartwell and Dexter Lumis made their union official with an unforgettable wedding.