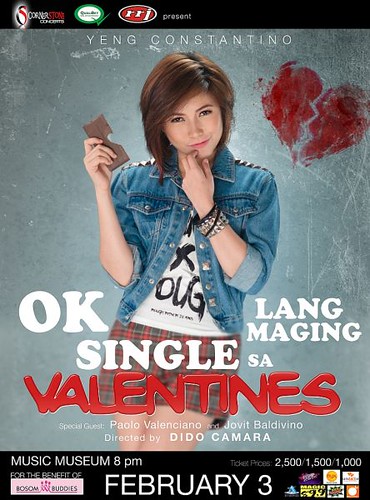 Orange Magazine TV was one of the official media partner for the event and it was an honor to be part of “OK Lang Maging Single Sa Valentines” concert as it also benefited the Bossom Buddies – a charity for breast cancer awareness, encourage early detection, support treatment, and celebrate healing. 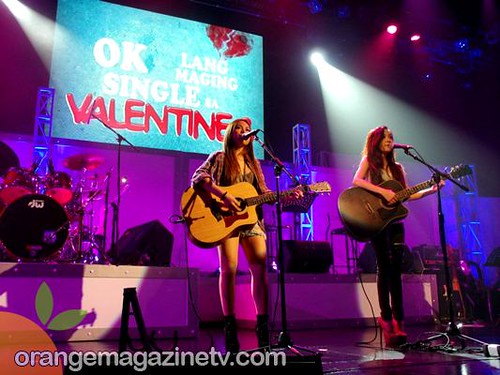 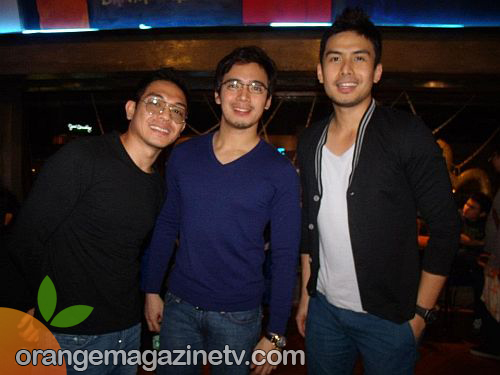 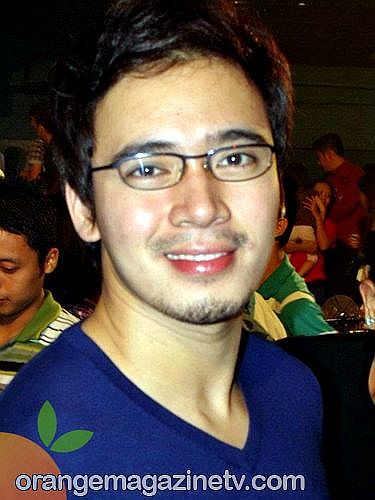 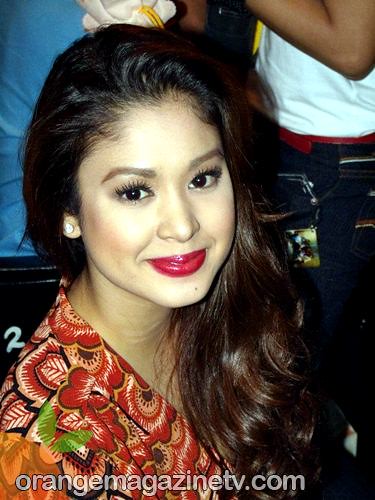 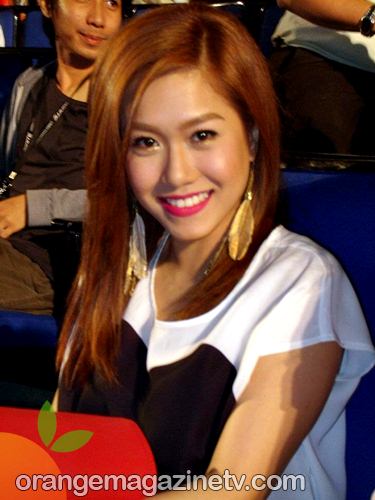 The concert starts with a video showing Yeng Constantino and Sam Milby in a scene where they are acting up as couples having fights and eventually lead to Yeng’s being single. 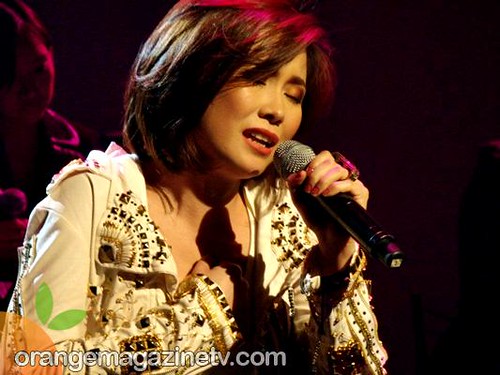 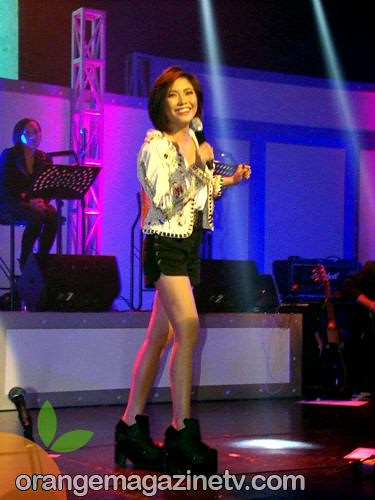 Then goes Yeng Constantino on stage performing a classic Bon Jovi hit “You Give Love (A Bad Name)“. She was in rocker-form with her rock-chick ensemble which suites her new image.

She declared the night as a celebration for all the single people present in her concert and that “single is just a status.” Yeng Constantino later performed a series of medley explaining to the crowd some reasons why some are single or remains single. The “single” medley consists of Hotdog’s “Pers Lab,” Agaw Agimat’s “Sabi Nila,” Apo Hiking Society’s “Mahirap Magmahal Ng Siyota Ng Iba,” Bituin Escalante’s “Kung Ako Na Lang Sana,” and Rachel Alejandro’s “Mister Kupido”.

The crowd roars some more every time a video of Yeng Constantino and Sam Milby flashed on the widescreen. The VTR is a series of videos that serves as opening video for Yeng’s song line-up or repertoire. Here’s a soulful version of Yeng Constantino performing Adele‘s hit “Someone Like You” which for me is one of the best rendition I’ve heard so far: Helping out Yeng Constantino is some of the song productions are her special guests Pilipinas Got Talent Season 1 grand winner Jovit Baldovino and Paolo Valenciano (son of Mr. Pure Energy Gary Valenciano). 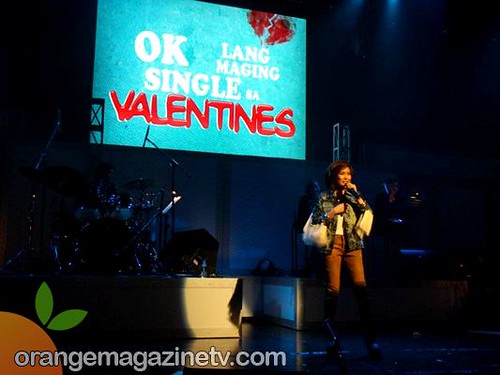 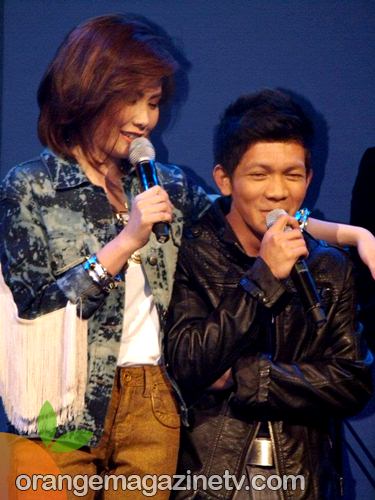 Another video is flashed in the screen, this time making it more cheesy and funny, with the participation of Yeng Constantino’s yaya who’s a real scene-stealer. Yeng Constantino did a costume change and this time, in a more girly get up with customized heart-shaped paper brooch and top that lights up.

Although, there have been consistent rumors of her being a lesbian because of her “tomboy” traits (and this is something she joked about during the concert), Yeng Constantino flirts with Paolo Valenciano making the crowd went wild. 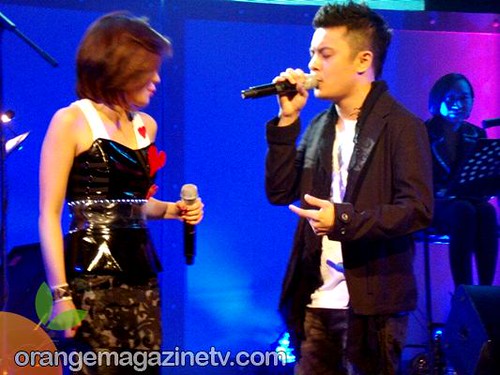 The two performed a medley of Rey Valera’s “Kumusta Ka Na” and After Image’s “Tag-Ulan”. Too bad, Paolo Valenciano is off key most of the time and they didn’t blend well during their duet. But I must admit they have “kilig” factor during their spiels. 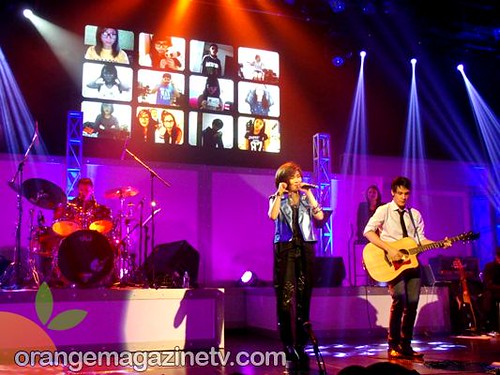 Yeng Constantino then did another costume change and introduced her new single “Pag-ibig” with Mica Caldito of 3AM. The official music video already reached 1,119,358 in YouTube as of February 7.

She also performed another medley, this time with rock icons of the 90’s Eraserhead’s “Wag Kang Matakot” and “With A Smile“, Rivermaya’s “Umaaraw, Umuulan“, and Bamboo’s “214“.

Yeng Constantino ended the night with another Bon Jovi hit “It’s My Life“. The over-all experience was good because Yeng Constantino gave a remarkable performance. It is actually my first time to hear her sing songs that is not she normally sings in gigs. There are some misses though with some of the song arrangements but they have selected the right tunes for the concert. And Sam Milby presence in Yeng Constantino’s videos, is enough to make it memorable.

I wonder if Yeng Constantino’s next project will involve acting in a series or in movies. I’m pretty sure she can nail it. 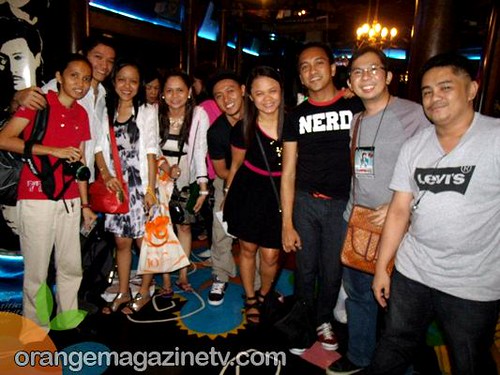 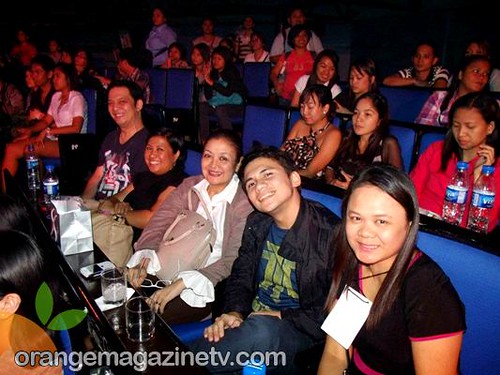 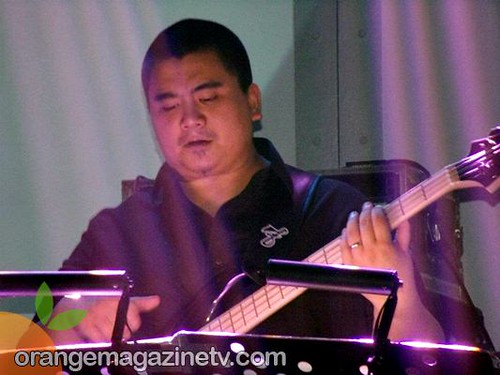 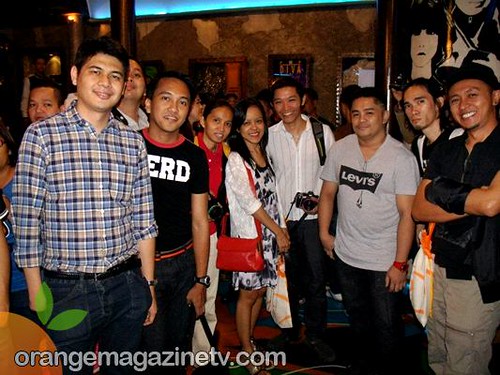 Special thanks to Erickson Raymundo and Karess Caballero of Cornerstone Talent Management Center.