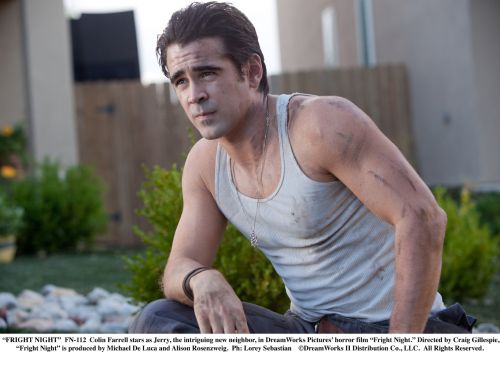 As darkness settles in theaters, “Fright  Night” in 3D is sure to bite a brand-new generation of horror-film devotees with its imaginative take on a cult classic-a perfect blend of horror and action.

As lead actor  Colin Farrell  explains, “There are none of those romantic leanings. This vampire is just a killer. He’s over four hundred years old. He’s probably a little bit bored when we find him, but he feeds. He just feeds.”

A revamp of the 1985 comedy-horror classic, “Fright  Night” revolves around Charley (Anton Yelchin), a high school senior who’s on top of the world-he’s running with the popular crowd and dating Amy (Imogen Poots), the most coveted girl in school. But trouble arrives when Jerry (Farrell) moves in next door. He seems like a nice guy–at first. But there’s something not quite right, and no one else, including Charley’s mom (Toni Collette) seems to notice! After observing some very strange activity, Charley comes to an unmistakable conclusion: Jerry is a vampire preying on the neighborhood.

Farrell  admits he was, at first, skeptical about remaking this classic film because he holds the original in such high regard.  “I was 11 or 12 years old the first time I saw ‘Fright  Night,'”  Farrell recalls.  “I don’t want to say it’s sacrosanct,” he explains about his take on the original film, “but in a way it is and it’s kind of perfect in its own form.

“So I was frustrated when I read the script,” he continues, “because it was so good, I really wanted to do it! Just like the original, it seemed to straddle the line between horror and a kind of sweet tongue-in-cheek comedy.”

The entire cast seems like a hypothetical wish list, beginning with Farrell, who was the filmmakers’ first choice to play Jerry, the centuries-old vampire. “I was so excited that we could get him,” says director Craig Gillespie about casting Farrell in the complex lead role. “I couldn’t think of anyone more perfect. As written, Jerry’s an incredibly charismatic personality, but there is a sinister aspect to him too. I thought Colin would embody that perfectly.”

Farrell, clearly delighted to be baring vampire fangs, says, “When I met Craig, he was enthusiastic and had a very clear idea of how he wanted to tell this story. I want to say it was a no-brainer for me to want to be in his film. It really was a pretty easy decision.”

Essential in Farrell’s portrayal of the vampire is a little help from the special-effects makeup department to aid his facial transformations. The filmmakers wanted to peg Jerry’s transformations to the heat of the moment. As his anger increases, so, too, does his more demonic physical changes. Subtle in the beginning, the process is ramped up throughout the film.

Farrell was definitely up for the task of wearing all six stages of Jerry’s vampire makeups.  “That’s sort of unheard of for actors,” says make-up designer Howard Berger.  “But Colin is a trouper, and I think he felt like it was Halloween every day. He is, by far, one of my favorite actors to do makeup on, aside from just being one of my favorite people as well.”

The different stages of Jerry’s transformation were actually an experience that Farrell very much enjoyed, mainly because of the artistry of the makeup team. Offering enthusiastic praise, the actor says,  “They’ve done an amazing job. They’re Academy ® Award-winning makeup artists, and it was a blast to be around them. The days were long, but it was incredible from the get-go.”