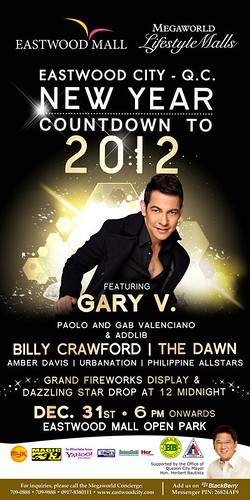 Watch the midnight sky explode with a vibrant exhibition of pyrotechnics that will definitely get you even more excited for the New Year. Join the coolest crowd and celebrate the last few hours of 2011 at the most happening place this side of the Metro only at Eastwood City!

Ring in success and happiness for the coming year and join the whole of Quezon City on December 31, 6:00 PM, as the 2012 New Year Countdown happens at Eastwood City.

Witness the performances of the best local artists headed by Mr. Pure Energy himself, Gary Valenciano, along with Philippine All Stars, Billy Crawford, Urbanation, Amber Davis, and The Dawn. Also performing are Gary Valenciano’s sons Paolo and Gab Valenciano and the Adlibb dancers. Eastwood City’s very own twin mall mascots are also going to be there!

Count down to the stroke of midnight and witness the dazzling star drop right before the grand fireworks display opening 2012 with a bang!

This event is made possible through the help of MYX, Magic89.9 FM, Yahoo! Philippines, Party Shots Photo Booth, Business World, HerWord.com, and the Office of the Quezon City Mayor the Hon. Herbert Bautista.