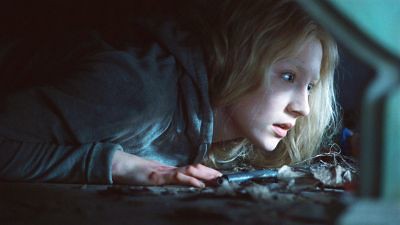 A teenage girl goes out into the world for the first time – and has to battle for her life, in Columbia Pictures’ action-thriller “Hanna.” Directed by Joe Wright (“Atonement,” “Pride & Prejudice”) and starring Eric Bana, Cate Blanchett and Saoirse Ronan, “Hanna” will be shown soon exclusively at Ayala Malls Cinemas (Glorietta 4, Greenbelt 3 and Trinoma).

In the film, Hanna (Ronan) is 16 years old. She is bright, inquisitive, and a devoted daughter. Uniquely, she has the strength, the stamina, and the smarts of a soldier; these come from being raised by her widowed father Erik (Bana), an ex-CIA man, in the wilds of North Finland.

Erik has taught Hanna to hunt, put her through extreme self-defense workouts, and home-schooled her with only an encyclopedia and a book of fairy tales. Hanna has been living a life unlike any other teenager; her upbringing and training have been one and the same, all geared to making her the perfect assassin.

But out in the world there is unfinished business for Hanna’s family, and it is with a combination of pride and apprehension that Erik realizes his daughter can no longer be held back.

This turning point in Hanna’s adolescence is a sharp one; she is separated from Erik and embarks on the mission that she was always destined for.

“What interested me in the script was the character of Hanna; we don’t see enough films with a teenaged female protagonist,” director Joe Wright explains. “Thematically, I’ve always been intrigued by characters who are holy fools – like E.T., Chauncey Gardiner in `Being There,’ and Kaspar Hauser in Werner Herzog’s movie – and who are not really of this world. Those last two, especially, have grown up in a world that doesn’t have the pressures of outside society and so-called civilization. They come into our world with an adult consciousness but with the naïveté of a child. I find it fascinating how someone like that experiences the world, because it offers us a subjective opportunity to see things afresh.

“For a far more personal reason, what drew me to Hanna was its female protagonist,” continues Wright. “A very dear friend of mine was raped around the time that I was reading the script, and I was so angry; I had been thinking about how women are placed within society, and about what it means to be a young woman in today’s cultural climate. I look around, and I wonder whatever happened to feminism; it wasn’t meant to be a passing fashion, it was meant to change the world forever. I’m appalled by the sexualization of teenagers, and by Hello! Magazine culture. These things scare me. There was an impulse to create, as a response to what happened to my friend, a strong female character who had grown up outside of gender sexual politics, who had never met another woman, never seen advertising nor had a clue what lip gloss was”.