To be shown exclusively at Ayala Malls Cinemas nationwide starting November 18, “By the Sea” follows an American writer named Roland (Brad Pitt) and his wife, former dancer Vanessa (Jolie Pitt), who arrive in a tranquil and picturesque seaside resort in 1970s France, their marriage in apparent crisis. As they spend time with fellow travelers, the couple begins to come to terms with unresolved issues in their own lives.

Watch the By The Sea Featurette: “A Look Inside”

A couple in the middle of dealing with unimaginable grief, who doesn’t know how to cope, and whose marriage is being greatly tested by it, Roland and Vanessa are still deeply in love with each other. Yet, this relationship has been temporarily derailed by loss, one to which they are reacting quite differently.

Jolie Pitt introduces us to the protagonists: “When you meet them, you assume that Roland is a bully and a drunk. You think he’s quite irritated with Vanessa and focused only on himself and his writing. You also assume that she is focused on the way she looks, doesn’t like people and is above it all. In fact, Vanessa is on prescription medication at a time when most people didn’t know what depression even was. Then, you slowly discover that there is a reason that they are avoiding each other…and a reason that they have a lot of anger. They’ve been sitting on something for a very long time, and they both have never addressed it with each other. They’re in so much pain and take it out on one another. By being aware of and studying other people, it allows them to forget themselves for a bit, and it breaks them open so they rediscover each other.”

The director explains the attraction to developing these characters: “Most would probably divorce in Vanessa and Roland’s circumstances, but there is that central idea of commitment to someone to whom you have dedicated yourself. Sometimes, marriage isn’t easy, but you know that you have made that commitment, you have history, and you know why you are with that person. There is a comfort to it. It’s often true that one person wants to give up more than the other, and that it takes one to keep it alive, as Roland does in our film.”

Jolie Pitt admits that this production offered her the opportunity to rediscover her love of the craft of acting. “It’s been a long time as an actor since I felt like I was free to create and play, to be irreverent and inappropriate… and a little too loud and make bold choices. I wanted something where I could be bold and explore and not have it fit into something that needed to be sold a certain way.”

The filmmaker is the first to admit it’s a different type of stress when you’re on the other side of the camera. She reflects: “When you’re a director who is also an actress in the film, you have very little sympathy for your own character…at least at first. My first pass in editing was very focused on the other characters, and it took me a while to focus on Vanessa and allow her to be important to me a storyteller. I needed that distance for awhile in order to find her.”

Jolie Pitt is currently directing “First They Killed My Father: A Daughter of Cambodia Remembers,” a depiction of the Cambodian genocide through the eyes of a child, and is executive producer on the forthcoming animated feature film set in Afghanistan, “The Breadwinner.”

Rated R-18 Without Cuts, “By the Sea” is distributed by United International Pictures through Columbia Picture. 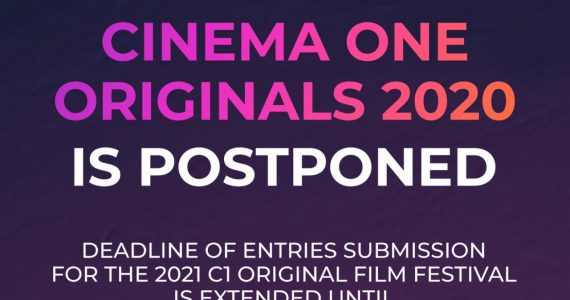 Team Orange 08 Apr 2020 0 comments
Cinema One Originals puts off the film festival slated this year and extends deadline for the submission of script entries for its 16th run until June 1 (Monday), allowing more…