As part of the agreement, one of the biggest names in remittance, Western Union, will provide senders a free, 30-day TFC.tv Lite package for every valid transaction. TFC.tv is the online platform of ABS-CBN Global’s flagship service, TFC, which provides access to ABS-CBN programs and other content to viewers outside the Philippines.  Customers who make valid transactions using wu.com; Western Union® or Vigo (Canada only); agent retail locations in the U.S., Canada, as well as selected countries in the Middle East, Oceania, Central and South America, Europe, Asia and Africa, can redeem up to three times within the promo period. 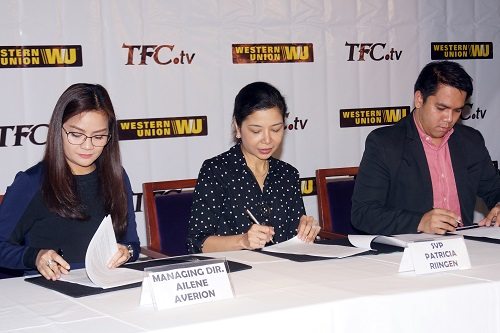 From the onset, Riingen said that given the two industry giants’ vision and mission, the tie-up made perfect sense from the very beginning. “We were really interested in the collaboration with TFC because we can potentially leverage our combined strengths.  We’re both in the business of connecting migrant workers and Filipinos who live and work abroad and to their families as well as to the Philippines.”

Riingen adds that TFC and Western Union’s goals run parallel.  “Our thrust is to be able to provide a means for consumers to send their money reliably and conveniently and to connect them with their families.  It’s the same principle that TFC has. It’s to connect Filipinos abroad with the Filipino culture here.  I think it’s a good collaboration and it’s one that really complements each other,” she added.

Overseas Filipinos (OFs) and senders in selected countries will benefit from the promotion as they get two values for the price of one.  With the TFC.tv Lite Package, qualified senders can get updates from news programs as well as entertainment from ABS-CBN’s top-raters, from drama to the comedy genre.  It also includes a livestream of ANC and a seven-day archive of ABS-CBN shows.  Terms and conditions apply.

On top of these programs, qualified senders can also enjoy award-winning Kapamilya actor and current Western Union brand ambassador John Lloyd Cruz’s selected iconic films.  These include: “A Very Special Love,” “Dubai,” “It Takes a Man and a Woman,” “Unofficially Yours,” “You Changed My Life,” “24/7 in Love,” “My Amnesia Girl,” “One More Chance,” “Now That I Have You,” and “The Trial.”

According to Averion, TFC subscribers currently can only enjoy this content through the platforms of TFC as ABS-CBN’s international arm, but they can now be enjoyed by a wider audience.  “Today, Filipinos across the world can choose to watch nearly all of the available ABS-CBN shows on TV and radio through our available platforms: our cable partners, our digital box (IPTV) or through TFC.tv.  And with this synergy between Western Union and TFC, OFs, both our customers and non-customers will be able to experience our core offerings and strengthen that link through remittance and content.  We look forward to more opportunities for synergy in the future,” she added.

The opportunity for cooperation is wide for both TFC and Western Union. According to the latest Stock Estimates of Filipinos overseas, there are over 10 million OFs and the numbers are increasing.  In 2015, remittances amounted to $25.76 million, or a 4.6 percent increase from $24.63 million in 2014 according to the Bangko Sentral ng Pilipinas.  With this growth in population and remittance needs, both companies can look at more areas for synergy.

The event was hosted by Boto Mo, Patrol Mo and ABS-CBN News Channel’s Gretchen Ho with performance from The Next Big Diva Morissette Almon.

For more information on the promo, visit www.tfc.tv/wu.