Eddie Redmayne Greets Philippines, Leads Magical Cast Of “Fantastic Beasts And Where To Find Them”

Academy Award winner Eddie Redmayne stars in the central role of Magizoologist Newt Scamander, in Warner Bros.’ “Fantastic Beasts and Where to Find Them” which takes us to a new era of J.K. Rowling’s Wizarding World, decades before Harry Potter and half a world away in America.

The casting of “Fantastic Beasts” began with the character of Newt Scamander, whose visit to New York becomes far more eventful than he ever imagined. Producer David Heyman says that Eddie Redmayne was the filmmakers’ first and only choice for the part. “He is quintessentially British, and an actor for all times who can play a character from any time. Eddie is brilliant at getting under a character’s skin and exploring every detail of a role, yet all that effort is invisible. All you see here is Newt an outsider who is somewhat knotty but winning and engaging, someone you immediately invest in.”

Describing his role, Redmayne says, “Newt is most comfortable around beasts and is seemingly content to be on his own in the company of his animals, which are the be all and end all of his life. What I love about Newt is his passion; his only agenda is to teach the value of these creatures to the rest of the magical world, which considers them dangerous because they could give away the existence of wizards.”

Challenging the status quo, “Newt believes that with proper education, wizards could come to appreciate how magnificent these animals are and learn to coexist with them,” says Redmayne. “At the beginning of the film, he’s spent a year in the field, traveling around the world doing research for his book. Along the way he’s rescued some of these endangered species, which he keeps in his case, containing a wondrous plethora of terrains. He has amazing empathy with his creatures, although he’s not particularly good with humans. But through the people he meets on this journey, he starts to realize there has been a hole in his life.” 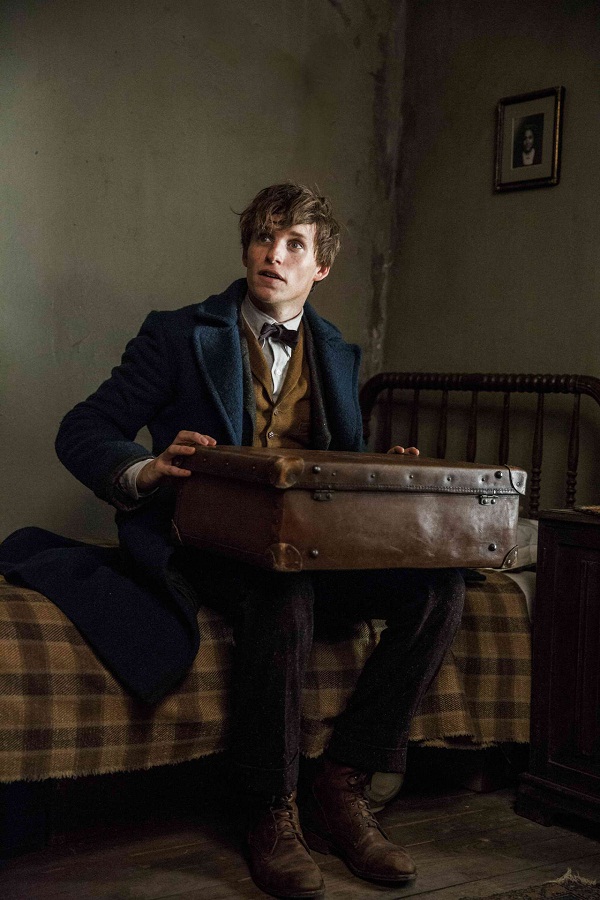 Not long after arriving in New York City, Newt meets three people who will change everything: a witch named Tina Goldstein; her younger sister, Queenie; and, most surprising of all, a No-Maj (a non-magical person) named Jacob Kowalski. It isn’t long before these strangers find a common bond and form an uncommon friendship. Redmayne offers, “Newt essentially stumbles onto them, and throughout the film, their growing camaraderie becomes an essential element of the story.”

“The friendship that develops between the four of them is the most important thing in the movie,” screenwriter J.K. Rowling declares. “It’s always the relationships between the characters in my stories that carry you through.”

Katherine Waterston, who plays Tina, observes that the way these four strangers come together is almost instinctual. “It can be lonely being an oddball until you find other oddballs. Their friendship is not a mere byproduct of the extreme set of circumstances they go through together; it is their common experience as outsiders that draws them to one another.”

“They aren’t caricatures,” insists Alison Sudol, cast in the role of Queenie. “There is a genuine humanity to each of these characters. The things they face are not unlike the things we face in our own lives, but it’s seen through a wizarding angle in a very interesting way.”

Yates adds, “Jo has always been interested in outsiders people who are misunderstood or who are slightly out of kilter with the rest of society.”

Perhaps the ultimate outsider is Jacob, who is the only one in the foursome without magical powers. Dan Fogler, who plays the role, shares, “Even though ‘Fantastic Beasts’ is an adventure that runs the gamut of action and humor, and with gigantic sets and effects, they did an amazing job honing in on the relationships and the chemistry between these characters. I think audiences will really see themselves in these people…these quirky misfits who form this little team.”

Yates reveals that finding the chemistry began in the audition process. “We started with Eddie as Newt and then built the world around him. It was a bit like putting a band together,” the director laughs. “Eddie flew to New York with us and we auditioned lots of Tinas and Jacobs and Queenies with him in a room. Over a 48-hour period, he did the same scenes over and over again with different people, and out of that process we found our core cast four actors who all bring something different to the movie in interesting ways that complement one another.”

Redmayne says the results were worth it. “The film revolves around this quartet of people who start out moving in completely opposite directions and end up cohered as friends. It was wonderful getting to work with three such brilliant actors as Katherine, Alison and Dan. We were all bound by this sense of responsibility: we all love the ‘Potter’ films and the world that Jo created for this film and just wanted to do the characters proud.”

“Fantastic Beasts and Where to Find Them” opens across the Philippines on November 17 in 2D and 3D in select theatres and IMAX, and is distributed by Warner Bros. Pictures, a Warner Bros. Entertainment Company.