A month after President Rodrigo Duterte vowed to sign the Paris Agreement on climate change, the world gathers on 5-6 December 2016 in a 24-hour solidarity broadcast dubbed “24 Hours of Reality: The Road Forward,” focusing on climate change solutions in the 24 largest carbon-emitting countries.

Hosted by former US Vice President and chairman of The Climate Reality Project, Al Gore, the annual 24-hour live event, watched by millions of viewers around the globe since 2011, will celebrate the milestone of the Paris climate pact and ensure concrete commitments by nation leaders.

The Road Forward will zoom into the 24 countries that play significant roles in the fight against the effects of climate change. During the broadcast, the challenges faced and practical solutions made by the 24 biggest carbon-emitting countries will be in focus. 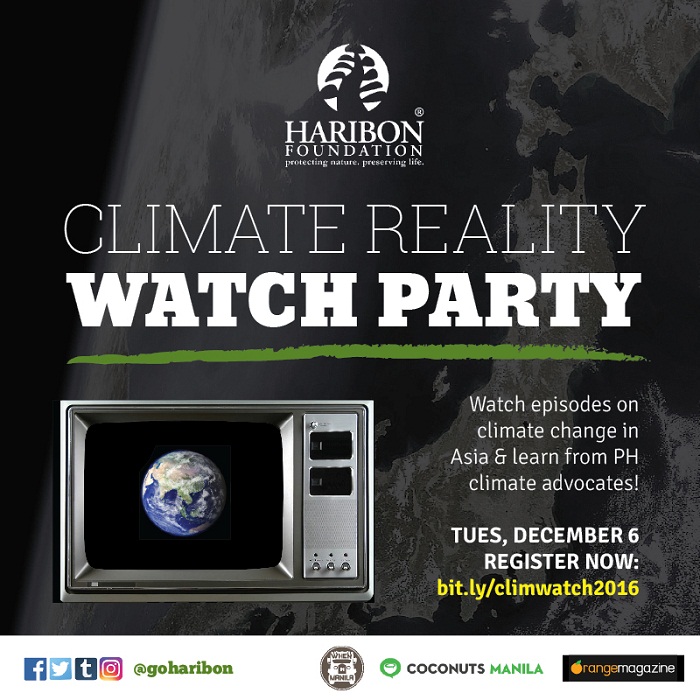 “The Paris Agreement has fundamentally and permanently altered what the world thought was possible in terms of addressing the climate crisis,” said Gore in a press statement.

“The conversation no longer hinges on if we can do something to address climate change. Instead, world leaders, environmental activists, and ordinary citizens are asking what we can do to solve this crisis and how we can work together to do it.”

“Climate change threatens not only people but species as well. We risk losing species where no shift in range is possible. Earlier egg-laying by birds may not coincide with fruiting of plants when these were conveniently timed to ensure food is abundant for their chicks,” Beechie de la Paz, Haribon Foundation Chief Operating Officer explains. Haribon lauds the movement happening in the global community to unitedly act in reducing greenhouse gases in the atmosphere.

The Road Forward envisions the hard work behind the Paris Agreement coming to life. With dynamic programs and performances, it is meant to raise awareness and motivate individuals and communities to add their voice to the global chorus that urges leaders of countries to keep their promise to act on climate change.

Gore will be joined by huge icons including notable thought-leaders, scientists and with special guest appearances from celebrities around the world in a solidarity call to work on the agenda of urgent climate change action.

The 24 Hours of Reality: The Road Forward telethon will be available for viewing online or via viewing parties set up by different groups and organizations.

Haribon’s new office is located at 100 A. Legaspi St. Brgy. Marilag, Project 4 Cubao, Quezon City. For inquiries or registration, contact them at 421-1209 or via bit.ly/climwatch2016.