Singing the Whitney Houston megahit, I Have Nothing, Ivy Grace Paredes took The X Factor UK stage to thundering applause and what host Dermot O’Leary described as the “loudest standing ovation of the night.” Judges Louis Walsh, Sharon Osbourne and Nicole Scherzinger were on their feet acknowledging how well the Filipino singer did in this round of the competition.

In giving her comments after Ivy Grace’s performance, Nicole said, “I know why you left the Philippines. (It is) because your voice is way too big for the Philippines alone. It is meant for the entire world to hear.”

Simon on the other hand quipped, “Is it the most original thing we’ve ever heard? No.” But quickly changed gears saying, “Is it exciting? Yes! Should you be in a chair? Yes!” 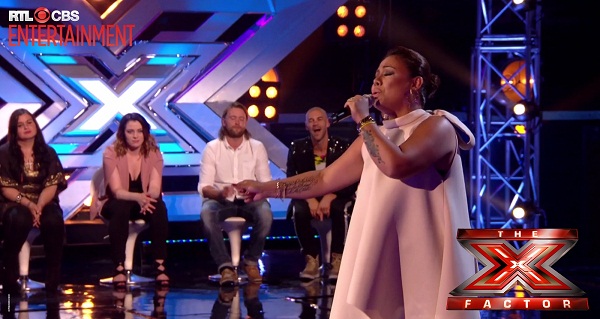 Sharon Osbourne, mentor of the Overs Category to which Ivy Grace is grouped, already had all `her six chairs filled. After Ivy Grace’s performance she had no choice but to then give her a chair. Ivy Grace took over the seat Marianna Zappi occupied securing for herself a spot in Sharon’s top 6 and a position in the Judges’ Houses round.

Unfortunately, Ivy Grace will no longer be part of the competition. It was confirmed last week that she had to leave The X Factor UK after being unable to get a visa to the US where the Judges’ Houses round would take place.