@TweetupMNL, a volunteer community of active netizens who are united by their passion for social media, spearheads Social Media Day 2016, now on its 5th year, to be held at the Samsung Hall, SM Aura Premier, on June 30, 2016.

In light of the recent negativity that has flooded our newsfeeds these past months, Social Media Day adapts the theme #TayoPH, which stands as a virtual call to action and a celebration of how social media has become a potent tool that can bridge, give a voice and empower. It is a clarion call to stand together as a people. To rebuild, reconnect, reboot, refriend. It’s time to make the conversation positive and productive again. To celebrate social media’s triumphs and recall its potential harnessing social media’s strengths in bringing people together, in crossing boundaries, and merging divides.

Indeed, Social Media has become more powerful than ever. 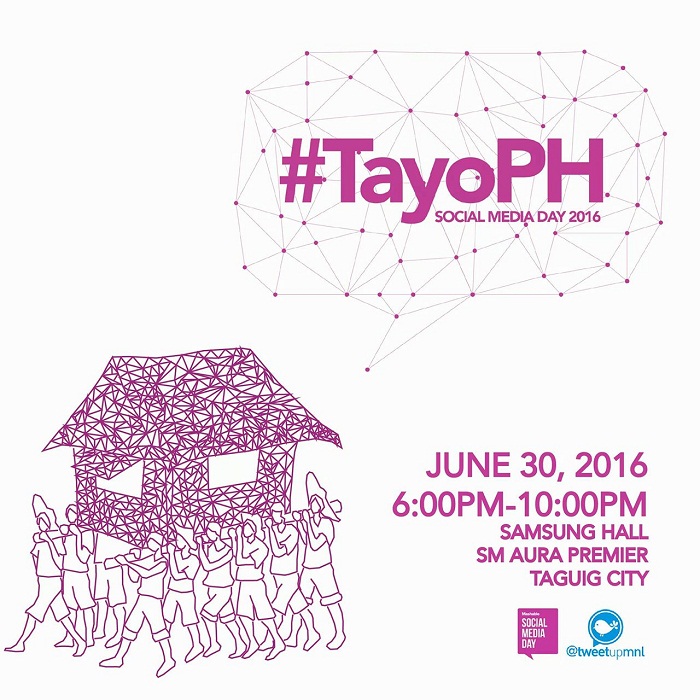 “We’re very proud to say that Social Media Day has been 100% volunteer driven from the very beginning,” Tonyo Cruz, also a cofounder of @TweetupMNL relates. “And each year, the number of involved communities continues to grow”. Social Media Day 2016 is brought to you by Smart Communications and SM Supermalls. With support from PayMaya and PLDT, as well as Zen Zest, CTBC Bank, Oishi, World of Fun, Binalot, Picture City, Freelancer.com , Adobo Magazine, The Philippine Daily Inquirer, Commune and Mili. Admission to Social Media Day 2016 is free.