Chaos nightclub at City of Dreams Manila heralds yet another eventful year with its second anniversary celebration. The trendsetting venue will feature Los Angeles-based Trap and Electro House artist Party Favor who will spin his trademark bass-laced tunes to get all partygoers in a frenzy of excitement on February 25. To jump start the 2nd anniversary party scene, Chaos resident DJs MVRXX, Jet Boado, and MC Ronthug will perform during the early part of the event.

Since its opening, Chaos consistently showcases an impressive roster of both international and local artists from all genres of the EDM and Hip-hop spectrum on weekends, and also highlights live performances by stellar local bands on Wednesdays.

As one of the top rising artists in EDM, Manhattan-born Dylan Ragland aka Party Favor’s career in music took off in 2013 when he worked on a remix for Miley Cyrus’ “Someone Else”. He signed on to record label Mad Decent and released the chart-topping electro track “Bap U”, notably his most recognized original song, which became a staple in numerous club playlists across the US and Europe. 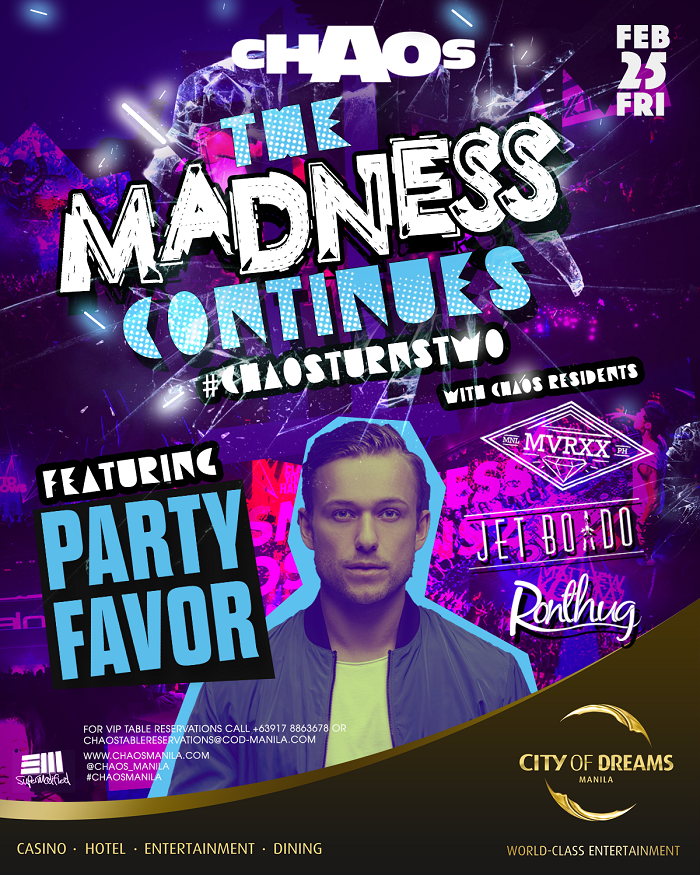 Party Favor‘s newest EP release Party and Destroy hit #2 on the iTunes album charts and the lead single “Give It To Me Twice” garnered over 1 million plays on Spotify in its first two weeks. The 2016-released EP boasts of collaborations with Dillon Francis, Gucci Mane, Sean Kingston, Rich The Kid, Gent & Jawns and Georgia Ku.

His success abroad and at home is undoubtedly due to the love and support that his music receives from superstar talents such as Skrillex, Diplo, Borgore, DJ Carnage, GTA, Dillon Francis, RL Grime, Bro Safari, DJ Snake, and Flosstradamus.

Paving his way into 2017 with a headlining tour for Party and Destroy, Party Favor’s live performances will feature multiple up-and-coming acts as well as a number of big names in the industry.

He is currently creating groundbreaking remixes for household artists such as Dillon Francis, Diplo, Flosstradamus, and Major Lazer, to name a few. With official work on Spinnin Records, Ultra Records, OWSLA and Mad Decent as well as international tours through Asia, Australia, Brazil, Japan, it is no surprise why Party Favor’s fan base is as diverse and well-rounded as his music.