Fructuosa Alma “Neneng” Olivo, a social worker who has devoted three decades of her life to educating young Badjaos in far-flung communities in Davao City, was named Bayaning Pilipino for 2017 in the 14th Gawad Geny Lopez Jr. Bayaning Pilipino Awards held recently at the ABS-CBN’s Dolphy Theater in Quezon City.

“To everyone who believe in what I do: It is very common, very simple… All of us are called to be heroes. When we give, let’s give until it hurts,” Neneng said in her short but emotional acceptance speech. 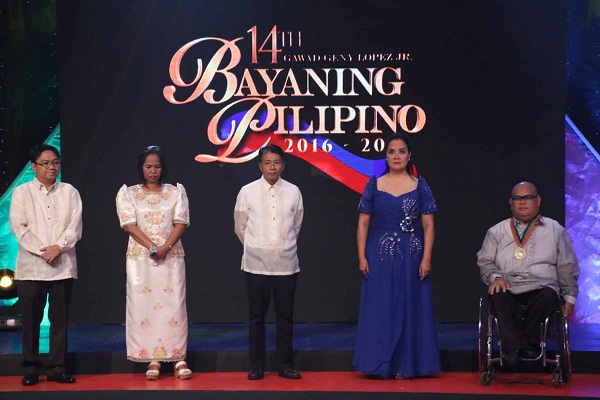 “Heroism can mean a lot of things. Not all heroes have grand titles nor do they enjoy vast resources at their disposal. What true heroes possess is their capacity to go beyond their limits and own flaws, passionate at what they can to improve the human condition. Their accomplishments are not the results of grand gestures but of small acts of selflessness done consistently and wholeheartedly,” said ABS-CBN chairman Eugenio Lopez III in his opening remarks.

Aside from Neneng, midwife John Mark Odani was also recognized with the Bayaning Kabataang Pilipino award for his dedication to providing healthcare to indigenous people of Brgy. Batian in Sarangani, while the Psoriasis Philippines Online Community, Inc. (PSORPHIL) won the Bayaning Samahang Pilipino Award for its advocacy to remove the stigma against people with psoriasis and to help psoriasis patients deal with depression.

The Bayaning Pilipino Awards also recognized awardees from North America, South Korea, and Qatar for being unsung heroes in their own ways despite being in a different country

In North America, the Bayaning Kabataang Pilipino sa North America award was given to Loizza Aquino, founder of “Peace of Mind 204,” a youth-led organization devoted to promoting awareness on mental health issues and help those who suffer from mental illnesses.

The Bayaning Samahang Pilipino sa North America, on the other hand, was given to Building Lives for a Better Future, a non-profit organization that offers financial assistance to students in need.

Katherine Corteza won the Bayaning Pilipino sa South Korea award for using her voice and speaking up about relevant issues such as labor abuse, inequality, and migration problems among Filipinos.

Last but not the least, Noli Perez named the Bayaning Pilipino sa Qatar for his selfless efforts to save overseas Filipino workers in the midst of danger and labor injustice in the Middle East.

A special citation was also given to Darlito Palermo of Tagum City, Davao del Norte.