Fans of Japan’s quirky and unique shows are in for a treat as Sony GEM, Sony Pictures Television’s newest general entertainment channel that showcases quality shows primarily from Japan, debuts on SKY Cable and Destiny Cable.

Sony GEM, initially available until February 28 for free to SKY subscribers, also showcases titles from China, Taiwan, and Korea. The channel is part of SKY Select, SKY’s on-top channel subscription service. Subscribers in Metro Manila and nearby areas can watch it on channel 116, while Regional subscribers can tune in to channel 222.

In the line-up of shows to watch out for is the story of Saburo Aikawa (Hiroki Hasegawa), a promising surgeon from a small island who does not have a license to practice. He finds love and comfort in Akiko (Izumi Inamori), a nurse. Things turn upside down when he saves the life of a young visitor, also named Akiko (Fumino Kimura), who offers him a place in a big time Tokyo hospital. Will he choose the simple life with the woman who can protect his secret or the life of a high power city doctor with a woman who can offer him the world but risk exposing himself? Watch “Forbidden Practices” every Wednesday at 9 PM. 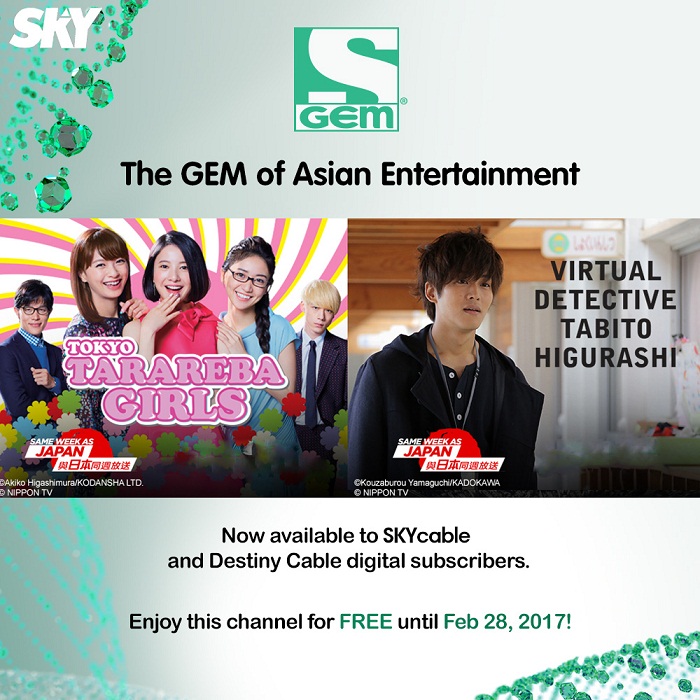 Out to tickle funny bones is the romantic comedy series about a 30-year old, unmarried woman with a floundering career as a screenwriter. Rinko Kamata (Yuriko Yoshitaka) and her friends Kaori (Nana Eikura) and Koyuki (Yuko Oshima) are “tarareba girls.” They regularly go out and complain about their mediocre lives. Rinko tries to turn her life around when an encounter with a blonde man makes her realize that making excuses like “If I was pretty, I would get the guy” is no longer acceptable as she is no longer a girl. Laugh with the “Tokyo Tarareba Girls”, showing the same week as Japan, every Saturday at 7:30 PM.

“So Young” is another romantic drama sure to get attention. It tells the story of Zheng Wei (Sabrina Chen) who gets her heart broken twice when both the men she loved left her to pursue their studies and careers. Years pass and the two men return to try and win her back. Follow this love triangle from Monday to Friday at 8 PM.

There are also crime and detective stories that are not the usual, like “Dandarin Rules” as its main character is a labor standards inspector instead of a police officer or a lawyer. Rin Danda (Yuko Takeuchi) will do whatever it takes to bring exploitative employers to justice. The show airs every Monday and Tuesday at 9 PM.

Meanwhile, Tori Matsuzaka is “Virtual Detective Tabito Higurashi,” a young man who’s lost four of his five senses due to an accident. He retains his sense of sight that lets him see people’s feelings. This enhanced vision helps him investigate crimes and solve mysteries. Catch him the same week as Japan,every Thursday at 9 PM.

Sony GEM also feature variety shows that can entertain any interest. Learn how to make life easier with everyday items on “TOKUSON: Life Hacks!” Watch it every Monday at 10 PM. Renowned actor and model Mocomichi Hayami presents his domestic side in “MOCO’s Kitchen” where he shares his personally crafted recipes to fit viewers’ requests every Tuesday at 10 PM. Last but not least, Mr. Ken Shimura is back with his animal friends in “Shimura ZOO Season 6,” Wednesdays at 10 PM. The season will feature a wide range of animals and the precious bonds between them and humans.

After the free offering, Sony GEM will be available as a stand-alone addition for only P50 per month starting March 1. It will also be included in the Select Family Pack for P350 a month.

SKYcable provides quality home entertainment with the widest range of standard and high definition channels and other top-of-the-line services such as flexible subscription options via SELECT, iRECORD that records, pauses, and rewinds live TV, as well as real-time coverage of live concerts and sporting events via FREE VIEW and PAY-PER-VIEW.

Enjoy over 90 channels in clear digital signal for only P550 per month with Destiny Cable. For inquiries about the services and promos of Destiny Cable call 418-0000. You may also contact Destiny Cable via their email address, weserve@destinycable.com.ph.