The PRODUCE 101 fever continues to run hot! Dubbed an “idol group miracle” by both the media and fans alike, JBJ has announced they will be making their first visit ever to Manila on January 14 to spend the New Year with their Filipino fans! JBJ 1st Fan Meeting In Manila “Come True” tickets going on sale November 29th at ticketnet.com.ph . 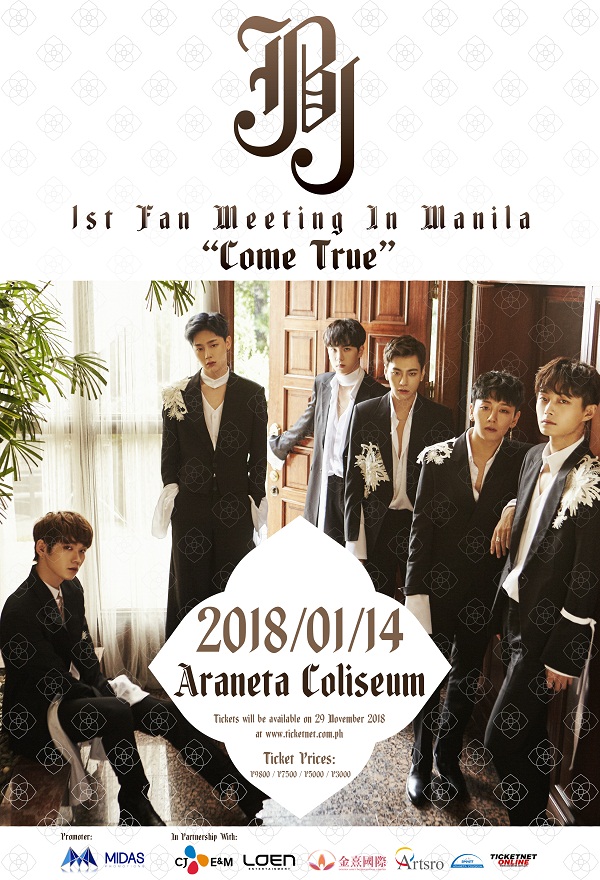 JBJ was dubbed an “idol group miracle” in Korea, because, even though members Kenta, Longguo, Sanggyun, Taehyun, Donghan, and Hyunbin didn’t make it to the top 20 in Season 2 of PRODUCE 101, they were still able to gather huge support from fans, who decided to create their own “dream group”, purchasing expensive billboard ads at the bustling Samseong Subway Station in Seoul, and posting their wishes on hoping for the members to officially debut.

In the end, JBJ became a dream come true and successfully debuted as a limited 7-month group. Having just released their first mini album, JBJ reached more than 3 million hits within the first week, creating yet another miracle after miracle, proving themselves as the next rising star.

Having only debuted October 18, JBJ is definitely still a k-pop “rookie” and recently said during a radio broadcast that everything is really new to them and that they are really enjoying themselves. Donghan also humbly said he hoped that everyone would be willing to share with him their experience on the rules and tips of appearing on music programs. When chatting about their first music program debut, members said they were really pleasantly surprised when meeting the various idol groups “in person” and that they hoped to one day be able to meet their own idol- BTS.

JBJ 1st Fan Meeting In Manila “Come True” will be held at The Araneta Coliseum on January 14th, 2018.